Arianne Brown: Large family vehicles may be stare-worthy, but give a smile when passing by

SALT LAKE CITY — When you see a family driving in a large van, what do you think?

Now when I say large, I don't mean a regular-size van with a cute sunroof and power sliding door. I mean the literal mother load.

I'm talking about the 12-15 passenger chunk of a machine that comes in one color: "needs a car wash chalky brown" with the accompanying "wash me" etched in the back window in child handwriting.

The reason I ask you what your thoughts are when coming across such a spectacle is because as a mother of nine children, I happen to be the humble owner of one of these people-movers. Notice I didn't say "proud" owner. While the inhabitants thereof — aka, my children — are something to be boastful of, the automobile itself is a bit of an ... how do I say this nicely?

Recently, we took the "hunk of burning oil," as it should forever be known as, on a family trip to an area where no such vans are seen with children who all belong to the same family. Ordinarily, I'm pretty sure these types of vehicular crates are used to transport large numbers of persons to undesirable locations (read prisons).

Needless to say, while transporting our loveable loot around town, we experienced several sets of eyes piercing the untinted windows as they searched for answers.

"Are they all one family?" I saw one say.

And then there was the finger pointing as it counted the number of inhabitants.

Mostly though, there were just stares as we rock-and-rolled on by, shocking people as we bounced down the road.

But we're used to the stares, and they don't really bother us. In fact, we're just grateful that all passersby can see is that there are a lot of people belonging to the same family occupying one van. We are beyond delighted that the combination of (mostly) sound-proof windows and doors and the noise of traffic blocks out the sounds we are experiencing inside our capsule on wheels.

Inside our large family vehicle (LFV), there is music being projected over our spotty sound system in an effort to drown out and lull to sleep the shrieking screams of toddler children and complaints of older kids with their "Can you plug my phone in the charger?" requests and "How much longer?" repetitions.

Try as we may to balance out the noise by a calculated seating arrangement, it doesn't matter. The wavelengths of terror all have one landing spot in my ears, which threaten daily to take an early retirement.

"Get a movie or game system to fix the problem," some might say. "We just let our kids watch movies and play video games the whole time."

Thanks for the tip, but we have no such amenities. Let's just say, as a general rule, if you're in the situation where you are in need of a large vehicle to fit copious amounts of children, there is a high likelihood that the bulk of your funds are going toward feeding and clothing those children, and you're just grateful you have a car that fits them all with seat belts and ample floor space.

Speaking of seats and floors, if you are someone who passes by our people-filled transporter with your curious eyes, we are also glad that the reach of your gaze is unable to see what is atop the upholstery.

Try as we may to keep the mini-bus clean, priorities have been shifted to keeping the peace. That often means giving everyone a bag of Goldfish crackers, among other items that crunch. And when I say crunch, let's just say that feet do a lot of the crunching. #TheSnackThatsSmilesBackDoublesAsVanFlooring #ItIsTheFloor

Now that you know what's going on behind the scenes of LFVs, might I suggest that when you see one you drive past with a thumbs up for encouragement? Better yet, smile and wave with a prayer in your heart and give a fist up in solidarity for a family just trying to get from point A to point B.

Because whether you're a family of four in a sedan, or parents of five or six children all crammed in a minivan with a cute sunroof and power sliding door, or the humble owner of an LFV full with your LF, were all stepping on a pile of Goldfish crackers. It's just par for the course. 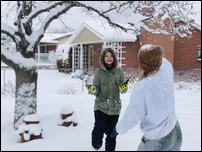 Snow can be a daunting thing for parents for many reasons. With the recent snowfall, I found myself torn between potential misery and happiness. But when I let happiness win, we were left with memories to last a lifetime.
×