SALT LAKE CITY — Utah lawmakers on Monday moved to give final legislative approval to a $100 million tax cut package that would benefit some families with children, veterans and senior citizens.

With their passage Monday, two of those bills now go to Gov. Spencer Cox for his consideration. One is awaiting final concurrence in the Senate.

The House voted 70-2 to approve Sen. Lincoln Fillmore's SB153, which would set aside nearly $55 million to expand the dependent exemption that was lost in federal tax changes in 2017 and caused a tax increase on many Utah families. SB153 would reduce taxes for over 388,400 taxpayers by an average of $140 a year, according to the bill's fiscal note.

Almost simultaneously, the Senate voted 27-0 to approve Rep. Walt Brooks' HB86, which would use about $18.3 million to eliminate income tax on some Social Security income, targeting Utah senior citizens living on fixed incomes. Fiscal analysts estimate it would reduce taxes for about 63,220 Utahns by an estimated $280 a year.

The House also voted 69-2 to approve Sen. Wayne Harper's SB11, which would use $23.8 million to eliminate income taxes for Utahns on military retirement pay. Fiscal analysts estimate SB11 would reduce the tax burden of nearly 18,100 people by an average of $1,315 a year.

SB11 was amended in a House committee, so after the House's vote it returned to the Senate for final approval, which is expected.

The three-bill tax cut package received the blessing of legislative leadership from both the House and the Senate last week.

Cox has also indicated he'll sign off on the tax cut package.

I proposed $80 million in my budget, but with our new budget numbers a $100 million tax cut is absolutely warranted. And targeting young families, seniors and retired military veterans is the right policy. A tip of the cap to the legislature on this one. https://t.co/X6ANtohL9n

A different tax proposal that hasn't gained traction — Fillmore's SB206, which would cut the state's income tax rate — has stalled on the Senate floor. Fillmore unsuccessfully attempted to push a vote on the bill Monday morning. 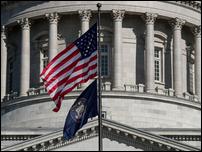 Education, rural infrastructure, transportation, affordable housing and homelessness were among the big winners as lawmakers moved Friday to approve this year's budget, but the work isn't done, with lawmakers still grappling with much to bond for infrastructure projects.

"I think we've done the tax cuts we're going to do," Senate President Stuart Adams, R-Layton, said after reporters asked Adams about the status of SB206 after the Senate adjourned in the morning. In wake of budget negotiations, Adams said, there wasn't funding for the across-the-board income tax rate cut this year, and lawmakers favored the targeted approach in the $100 million tax cut plan for seniors, families and veterans.

Lawmakers on Monday also took some of their final steps toward approving the rest of the budget after unveiling those additional appropriations Friday evening, setting an additional $238.6 million in ongoing funds and $676.6 million in one-time funding to the state's over $20 billion total budget.

As lawmakers close in on the final 2021 budget, a final piece as of Monday remained uncertain: infrastructure.

There's still about half of the state's $1.3 billion in one-time revenue this year left unappropriated — meaning lawmakers still have more to put toward infrastructure investments. Thursday, House lawmakers unveiled a massive, $2.26 billion transportation proposal, including $1.4 billion in bonding, but House and Senate leaders disagreed on whether the state should take on that much debt.

Those negotiations over bonding were still ongoing as of Monday morning, Adams told reporters in a media availability.