SALT LAKE CITY — Education, rural infrastructure, transportation, affordable housing and homelessness were among the big winners as lawmakers moved Friday to approve this year's budget, but the work isn't done, with lawmakers still grappling with much to bond for infrastructure projects.

The Legislature's Executive Appropriations Committee met briefly Friday evening to approve the budget, which set an additional $238.6 million in ongoing funds and $676.6 million in one-time funding to the state's budget.

"The big winners are the citizens of the state of Utah," Senate President Stuart Adams, R-Layton, told the Deseret News in an interview. "You can't pick one winner. There's too many to mention, and when you think you've got them all, you've missed one. And that's amazing in the middle of a pandemic."

New revenue estimates released earlier this month showed lawmakers had over $1.5 billion in extra money to spend this year despite the COVID-19 pandemic, including about $1.3 billion in one-time dollars and $205 million in ongoing funding. That's after lawmakers already made what they called "historic" early commitments toward education when they included a 6% weighted-pupil unit increase and $121 million for $1,500 teacher bonuses in the base budgets passed in the early days of the 2021 session. Those boosts to education totaled about $400 million.

The budget approved in committee Friday added another $31.7 million in ongoing money and $44.8 million in one-time money for public education, spread across multiple programs and initiatives, including $7 million for optional enhanced kindergarten.

This year's spending boosts come after lawmakers last year cut the state's more than $20 billion total budget amid fears of economic impact from the COVID-19 pandemic. But with better-than-expected revenues, the Legislature this year is moving to restore many of those cuts. 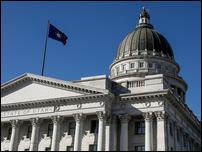 Utah lawmakers have even more money on hand to spend this year, according to new revenue estimates announced Friday.

Lawmakers are also moving to fund a $100 million tax cut package, targeted at Utah seniors, veterans and families with children.

"If you were to tell me a year ago when we were shutting down the economy in the middle of a pandemic, when we were self-isolating and we were all at home wondering what our economic future was, that we would be able to, the very next budget year, fund education, give teachers bonuses, to fund Medicaid expansion and to fund growth in Medicaid, to fund $50 million for affordable housing ... and do a tax cut?" Adams said. "The state of Utah is the winner."

The spending plan still left about half of the $1.3 billion in one-time revenues unappropriated — meaning lawmakers still have more to put toward infrastructure investments. Thursday, House lawmakers unveiled a massive, $2.26 billion transportation proposal, including $1.4 billion in bonding, but House and Senate leaders still disagree on whether the state should take on that much debt.

That issue, Senate Budget Chairman Jerry Stevenson, R-Layton, will be hashed out over the next week. The session ends next March 5.

"Again, in the middle of the pandemic, it's unbelievable to be able to balance lives and livelihoods to keep the economy going and to try to protect people's lives," Adams said. "I think we've done a decent job. The vaccines are coming out. The future's bright. It's a great day."

House Speaker Brad Wilson, R-Kaysville, earlier Friday told reporters this year's budget process has been one of the "smoothest" he's ever experienced.

Granted, lawmakers still need to decide how much they should bond for infrastructure, but Wilson said he's proud of where the state of Utah stands.

From a tax cut, to historic investments in education and infrastructure, "these things are only happening in one place in the whole country, and they are happening here," Wilson said. "We still have work to do ... but our state's future is very bright."

Stevenson said much of the rural project investment "comes with our new governor." Gov. Spencer Cox, from Fairview, Sanpete County, promised along the campaign trail that he'd prioritize rural communities as governor. Stevenson said those investments are "much deserved" for rural Utahns.

"We'd like to disperse the prosperity we have had along the Wasatch Front, spread it across the state," Stevenson said.

Senate Minority Whip Luz Escamilla, D-Salt Lake City, was happy to see $50 million for housing and homelessness, but she said there were "still a lot of things missing" that she and her Democratic colleagues would have liked to see in the budget, including continuous eligibility for children on Medicaid.

Some highlights in the budget include:

At least one thing that hasn't been included in the state budget was $50 million sought by Cox for a solution to traffic gridlock in Big and Little Cottonwood canyons — ski areas that attract visitors across from the nation. Studies are still being conducted to pick the best strategy, but one that has caught the interest of the governor is a gondola up Little Cottonwood Canyon.

Wilson said earlier Friday lawmakers hadn't moved to fund that this year because the issue is still being studied, and they'd rather not see that amount of money go unused for years while stakeholders continue to sort out how to spend it.