Gephardt: Without reminders, on-time vehicle registrations still down – but getting better

SALT LAKE CITY – Not nudging Utah drivers to renew their plates has led to more illegal cars on the road, according to records provided to the KSL Investigators by the Utah State Tax Commission.

Last year, the state stopped sending postcards in the mail reminding drivers to renew their tags, and on-time renewals plummeted. In September, the first month after the renewal cards ceased, just 30.9% of vehicles were renewed before their expiration date.

To be fair, records show Utahns have never been super-great about renewing their registrations on time. Even when they did send out the postcard reminders, a mere 58.54% got it done on time.

The reason the Legislature got rid of the postcard reminders was, what else, money. It cost about $900,000 per year to have them printed and mailed out according to Utah State Tax Commissioner John Valentine.

Asked whether or not the loss in tax revenue was more than was being saved, Valentine said it was hard to definitively say.

"There's a couple of different factors here," he said. "One is people aren't driving so they're parking their cars and not registering it during the pandemic. Another one is that they are forgetting to register the cars."

Another factor: Just because a driver didn't register their car on time doesn't mean it won't eventually get registered – and the state will collect then. They have less than one year's worth of data at this point.

"We attempted to do a number of different things to notify people they still need to register the car, even though they're not getting the postcard any longer," he said.

We are only 14 percentage points below the historical pre-pandemic 12-month average for vehicles renewed timely. Things are improving each month.

That advertising has worked, modestly. Each month, the state has seen a slow increase in the number of cars getting registered on time and, in January, the number was up to 44.5%.

"We are only 14 percentage points below the historical pre-pandemic 12-month average for vehicles renewed timely," said Utah DMV Director Monte Roberts. "Things are improving each month."

In the months since the reminder postcards were abandoned, the KSL Investigators have heard from a handful of folks who liked them, miss them and want them back. 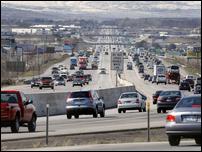 It's been several months since the Utah Division of Motor Vehicles ended its postcard reminder program for expiring vehicle registrations. But registration renewals have dropped since the program ended, according to a DMV news release.

An emailer who manages an emission inspection shop in Spanish fork told KSL-TV about 90% of their customers are upset they are not getting the renewal notices.

"I've actually had a few elderly customers in tears over it because they stress about getting a ticket from law enforcement," the shop manager wrote.

Lawmakers have also taken note. A bill is currently working its way through the Utah Legislature that would bring back the reminder cards.

Rep. Scott Chew, R-Jensen, is running HB170, which would require the Utah Division of Motor Vehicles to "send notification through the mail" at least 30 days before a vehicle's registration was set to expire unless the owner elects to receive notification by email.

The bill has already passed the Utah House of Representatives and is on its way to the state senate for consideration.