SALT LAKE CITY — The state of Texas is experiencing widespread blackouts during a once-in-a-generation winter storm that sent temperatures plunging across large portions of the state.

Experts say the blackouts were caused by a surge in demand as the weather disabled some natural gas, coal and wind energy sources. On Wednesday, millions of Texans remained without power days after the storms began.

Utah has had its own service disruptions in the past. In September, thousands lost power across northern Utah when a high-wind event damaged infrastructure across multiple counties.

The American electric grid is divided into multiple "reliability grids," interconnected utilities and organizations that serve as backups and suppliers to other grid members. Utah is part of the Western Electricity Coordinating Council, which serves 14 western states, two Canadian provinces, and even a bit of Mexico.

Texas has its own reliability grid, Eskelsen said, overseen by the Electric Reliability Council of Texas.

Western states keep more energy in reserve — about 12%, Eskelsen said, for contingencies — and are able to buy and sell power among themselves.

All these things together make Utah unlikely to have the same problems plaguing Texas right now in the event of extremely cold weather, he said.

That's not to say western states are immune from service disruptions. California frequently struggles with rolling blackouts during hot weather and wildfires. Branden Sudduth, a vice-president of reliability planning with the Western Electricity Coordinating Council, said last year's California blackouts came during an intense heat wave across the West, when other states didn't have electricity to spare and "had to hold on to a lot of that power."

Sudduth said the southwestern states in the Western Electricity Coordinating Council footprint are vulnerable to the same winter weather disruptions seen in Texas now. "They're just not prepared for extreme weather conditions," he said. Natural gas wellheads can freeze up, as can parts or components at plants.

Sudduth said being a member of the Western Interconnection could mitigate some of those problems if, say, Arizona were to experience the same cold snap seen in Texas.

"There is the ability to import power, through a major transmission network, into the state," he said.

Organizations like the Western Electricity Coordinating Council are always learning from extreme weather events, Sudduth said, and that Utah isn't "immune" from those problems even if it is better prepared for winter weather. 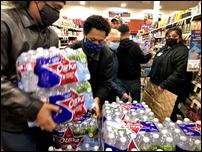 A historic winter storm has brought lower temperatures to Houston than in parts of Alaska and left millions of Texans without power.

If Utahns were to lose power fo an extended time during freezing temperatures, Rocky Mountain Power recommends they follow the advice of local emergency management experts. They recommend all Utahns be prepared for up to 72 hours for service disruption, Eskelsen said.

The company also has its own emergency preparedness page at RockyMountainPower.net.

"Basically, you have a contingency plan," Eskelsen said. "Other sources of heat and light, ways to prepare food, blankets, flashlights ... those kinds of things."

The site advises all Utahns to have an emergency kit with these and other items, including water, first aid supplies and cash.

Be Ready Utah, an emergency preparedness campaign from the Department of Public Safety's Division of Emergency Management, has localized information about disaster planning and readiness online at utah.gov/beready/index.html.

Graham Dudley
Graham Dudley reports on politics, breaking news and more for KSL.com. A native Texan, Graham's work has previously appeared in the Brownwood (Texas) Bulletin and The Oklahoma Daily.