SALT LAKE CITY — A flurry of measured police reform bills cleared another set of hurdles on Tuesday as they continue to make their way through the Utah Legislature.

None of the bills mean sweeping changes for Utah's police agencies, but each take incremental steps toward increasing accountability and transparency for police officers while also being supported by law enforcement officials.

Among those bills that were endorsed by the House Law Enforcement and Criminal Justice Standing Committee was one bill that previously stalled in front of that committee: HB62, which would add "conduct involving dishonesty or deception" as additional grounds for suspension or revocation of a police officer's certification.

A previous version of HB62 would have also allowed the Peace Officer Standards and Training council to investigate allegations that an officer violated a department's use-of-force policy. But the bill's sponsor Rep. Andrew Stoddard, D-Sandy, agreed to change it say it would investigate if an officer is "found by a court or by a law enforcement agency" to have knowingly engaged in "biased or prejudicial conduct" based on "race, color, sex, pregnancy, age, religion, national origin, disability, sexual orientation or gender identity."

With the changes, the lawmaker who originally balked at the bill, Rep. Matthew Gwynn, R-Farr West, agreed to support it when was given another chance in front of the House committee Tuesday.

"We're hearing a lot about our need to be bipartisan. ... I think we've shown an ability to be bipartisan," Gwynn said, thanking Stoddard for "coming to me about my concerns" and working to address them.

The House committee then voted unanimously to endorse HB62, forwarding it to the full House for consideration.

A slew of other bills won unanimous endorsement from the committee, including: 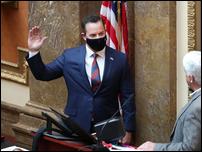 House Speaker Brad Wilson on Wednesday threw his support behind some police reform bills making their way through the Utah Legislature.

Scott Stephenson, the director of Peace Officer Standards and Training in Utah, supported the bill to require reports for pointing a firearm or Taser, saying it would help law enforcement expand its data, which he described as "an area that is very lacking."

"I also think it can benefit law enforcement and the public so they can see the decisions that officers are making when they decide not to pull the trigger," Stephenson said. "Frankly, the only time we hear of some semblance of that information is when bad situations happen and an officer has pulled their trigger."

Stoddard also spoke in support of the bill, saying it's important for data collection and maybe prevention of unnecessary pointing of firearms.

"The more you're paying attention to how often you're doing it because you have to document it, hopefully the less you will do it unnecessarily," Stoddard said.

Other Republican lawmakers also supported SB264, saying that while they don't necessarily like requiring officers to do more "paperwork," they deemed such incidents important to record.

The bills were forwarded to the full House for consideration.