SALT LAKE CITY — A proposed 4.5-mile, four-lane highway on Washington County's wish list for more than two decades received the green light Thursday from the U.S. Fish and Wildlife Service and the Bureau of Land Management.

The decision granting the right of way application came after the federal agencies worked with the applicant and Washington County to consider ways to offset the Mojave desert tortoise habitat losses from any approved development in southern Utah.

"The service is proud to continue long-term partnerships with Washington County, the state of Utah, the local community and the BLM to conserve the threatened desert tortoise while also balancing the long-term needs of growing communities," said the service's director Aurelia Skipwith. "This (plan) advances conservation through these crucial partnerships, and we thank all those involved for their collaboration and input."

The BLM has approved the Northern Corridor right of way for 1.9 miles on federal lands, and for a total of 4.5 miles on all jurisdictions. The final decision approves the establishment of a 6,813-acre zone within the Red Cliffs Desert Reserve, which will be managed for species conservation. The final decision also requires certain habitat improvements to protect and restore native plant species.

"Our goal in all of our decisions is to be good stewards and good neighbors and we appreciate the public engagement throughout the process which helped to refine and shape the decisions," said BLM Utah State Director Greg Sheehan. "Working together with the service, cooperating agencies, and the state of Utah, we were able to secure additional protections and opportunities for improving habitat in the national conservation area and Washington County."

Critics have long opposed the corridor because they say it will put the endangered desert tortoise in jeopardy and will serve as a gateway for more development. They accused Washington County and other officials of not pursuing routes less damaging to the endangered species.

Conserve Southwest Utah has been leading local and national efforts to protect Red Cliffs from the highway, and to develop transportation alternatives. In December, the organization along with the Red Cliffs Conservation Coalition issued a 114-page protest of the BLM's final environmental analysis.

The protest contends that building the highway through the conservation area violates several federal laws, including the Endangered Species Act and the National Environmental Policy Act. 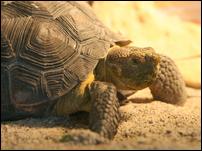 A proposed 4.3-mile, four-lane highway on Washington County’s wish list for more than two decades continues to inflame opposition by its critics who say it will put the endangered desert tortoise in jeopardy and is a gateway for more development.

"Not only does building a highway in Red Cliffs (conservation area) break major federal laws, but there are viable and affordable transportation alternatives outside of Red Cliffs that the bureau's own analyses have identified."

The southern Utah transportation corridor recently went through a public comment period and a federally mandated environmental review before it received approval.

The route was a provision negotiated as part of the 2009 Washington County public lands bill passed by Congress, but it has languished in the years since amid controversy.

In a previous land management plan with the BLM, the contested highway was omitted, prompting a rare field meeting of a congressional subcommittee in 2016 in St. George, where the federal agency was blasted for its failure to work with local officials on the plan's components.

A few years ago, Rep. Chris Stewart, R-Utah, introduced legislation to designate the corridor's route, but that languished as well, stoking further criticism from environmental groups that said the roadway would be incompatible with protections afforded to the tortoise.

"Renewing the Habitat Conservation Plan for Mojave desert tortoises is a great win for southern Utah," Stewart said in reaction Thursday. "Washington County can now move confidently into the future with travel planning and tortoise recovery."

The critics' efforts to stop the highway is not over with this approval, they warned.

"This is the beginning, not the end, of the fight to protect the world-class recreation, open space and Mojave desert tortoise habitat provided by the Red Cliffs National Conservation Area," said Todd C. Tucci, senior attorney for Advocates for the West, which is representing the Red Cliffs Conservation Coalition. "We look forward to convincing President-elect Biden — and a court, if needed — that (Interior Secretary Dave Bernhardt's) plan to punch a four-lane highway through this desert paradise will not protect, restore and enhance these irreplaceable recreation and conservation values."