SALT LAKE CITY — The year 2020 will likely be remembered for the historic health and economic toll of the COVID-19 pandemic, but a Utah economist says the promise of a brighter 2021 may be on the horizon, thanks to newly developed vaccines and a new federal stimulus package that could help cure what's been ailing the nation physically and economically.

"The pandemic really is the classic example of a black swan event, something no one saw coming, no one anticipated, and it's had an enormous impact on the economy and on individuals," said Zions Bank senior economist Robert Spendlove. Prior to the outbreak, he noted the Utah economy was trending upward with strong fundamentals and a positive outlook for the year.

Then the devastation of the pandemic changed everything, placing a cloud of uncertainty over the entire state and across the globe, he said.

"The good thing about black swan events is they're extremely rare, but they have a severe impact and they can't be prevented or predicted," he said. "So that's what we saw, this pandemic come on and it decimated the economy throughout the world."

Spendlove noted that despite Utah's low unemployment rate reported in December, the number of individuals filing for weekly jobless benefits continues to register at exceptionally high levels at more than 300% of pre-pandemic averages.

"During the worst part we had 33,000 (weekly claims) at the beginning of April, so we're a lot better than we were during the worst part, but it's still elevated and we still have people losing their jobs," he said. "And just in the last few weeks, we've seen those initial claims starting to trend up again."

He said those numbers should begin to improve as the COVID-19 vaccine rollout continues and more people are able to resume more normal social behavior. For now, he said there are short-term concerns about weakness in the state's economy with businesses pulling back financially, resulting in rising joblessness throughout the Beehive State.

"We're seeing unemployment starting to trend back up again, and economic weakness reentering," he said. "If you think about it, it's exactly tied to the surge that we're seeing in the pandemic."

But Spendlove hopes the vaccine will moderate the case numbers and eventually begin to reduce infections and therefore stimulate economic growth.

"This is the light at the end of the tunnel. Having a vaccine or having immunity to the virus, we'll be able to reopen for the economy," he said. "People will be able to travel again, they'll be able to go to restaurants like we were before and go to entertainment (activities) and things like that." 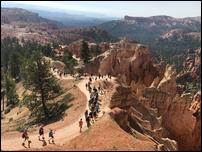 While he could not pinpoint exactly when the turnaround would occur, he said it would probably be later this summer or in the fall of 2021.

"As the vaccine is coming out and as we can return back to life, you're going to see a big surge in economic growth and you're especially going to see it in those areas right now where the biggest impact (has been)," he said. "Once people can return to personal services like the barbershop, you're gonna see a lot of that. The positive is we're starting to get through the worst part, but the next month or two is going to be really tough."

He said the worst part of the economic downturn may be behind us, particularly now that the new stimulus bill has been signed by the president.

"The benefit of the stimulus over the virus treatment is it actually can be effective very quickly, whereas it is going to take time (for the vaccine) to really take effect," Spendlove said.

Another regional analyst also expressed optimism about Utah's 2021 economic future, though with some differences of opinion on how that improvement will transpire. Wells Fargo economist Mark Vitner said economic growth in the Beehive State, especially in jobs, should continue to strengthen in the coming years.

"Hiring might moderate over the next couple of months, as consumers cut back on travel and going out, marking another setback for the hard-hit leisure and hospitality sector. While the ski season may provide some relief, we do not think travel will come back in a major way until vaccinations shift into high gear," he said. "The summer and fall should be better. Even with a bit of a slow start to 2021, we expect nonfarm employment to surge 4.7% for the year and look for 3.7% job growth in 2022."

Spendlove credits the actions of the federal government with avoiding a total collapse of the nation's economy through the passage of the first economic stimulus package — the Coronavirus Aid, Relief, and Economic Security Act.

"We would have seen a much more dramatic economic fallout. Now, the economy is coming back, but it's still very tenuous, even today," he said. "Our entire economic situation right now is being driven by the pandemic and about our ability to treat the virus. As long as the virus is still having a big impact, it's going to depress economic potential and economic growth."