SALT LAKE CITY — Sen. Mitt Romney said Wednesday he's confident that a second coronavirus aid bill will be passed with many aspects intact despite new demands from President Donald Trump that have injected uncertainty into the timeline and final form of the bill.

The U.S. House and Senate agreed days ago on a $900 billion bill that included $600 personal checks for most Americans. It was anticipated at the time that Trump would sign the bill, but he has since said he wants the check amounts upped to $2,000 per person.

In a call hosted by the Salt Lake Chamber, Romney, R-Utah, said he's "not sure what the process would be" to amend the agreed-upon legislation.

"Typically, presidents either sign a bill or they veto it," Romney said. "And particularly in this case, where the president's team was very much involved in the negotiation of the legislation, deciding how we would respond as a legislative body to the president's request is uncertain.

"But that being the case does not change the fact that, in my view, there will be no changes to the (Paycheck Protection Program) or to other spending measures that relate to people here in Utah."

The Paycheck Protection Program is a loan program for small businesses designed to incentivize them to keep employees on their payroll. The aid bill as currently written includes $284 billion more for PPP.

Here are a few more questions that came up during the hourlong discussion: 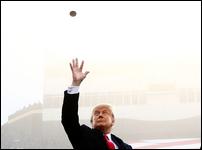 The United States on Wednesday faced the prospect of a year-end government shutdown after President Donald Trump threatened not to sign a $2.3 trillion package.

What money in the aid bill is specifically for Utah?

Money appropriated for capital investment in the bill will help public transportation projects in Ogden and in the Provo-Orem area, Romney said. "And of course, we got full funding for PILT — payment in lieu of taxes for our rural communities," he said. The PILT program involves federal payments to rural communities because of non-taxable public lands within their boundaries.

Why did some Utah congressmen vote against the bill?

Rep. John Curtis, R-Utah, was also on the call. Curtis voted against the aid bill, which was tacked on to broader government funding legislation. Romney and Democratic Rep. Ben McAdams were the only members of Utah's delegation who voted in favor of the bill.

"I just want to be really clear," Curtis said. "The senator did some amazing work on this COVID relief bill, and we absolutely are in harmony with the need to support and pass that bill. Unfortunately, Congress didn't give us that choice. It got wrapped into the broader appropriations. And that might be where we could have a little bit of discussion.

"But I just want to be clear: The work the senator did in bringing the bipartisan group together and push this forward, after months and months of stalemates, really was astounding. Everybody should be really pleased with that work."

Romney was a vocal proponent of reaching an agreement on a new aid bill in recent weeks. In a statement Monday, Curtis called the spending package the "height of Congressional dysfunction" because it "tied COVID relief up into a nearly 6,000-page budget bill we voted on just hours after receiving the text."

Other Utah congressional leaders like Republican Sen. Mike Lee said they were also voting against the bill because they hadn't had an opportunity to even read it.

"This process, by which members of Congress are asked to defer blindly to legislation negotiated entirely in secret by four of their colleagues, must come to an end," Lee said Monday. He was referring to the majority and minority leaders of the House and Senate, including House Speaker Nancy Pelosi, D-Calif., and Senate Majority Leader Mitch McConnell, R-Ky.

On the call, Romney likewise lamented the process but suggested that party leadership may want to keep it that way.

"It is a process which is really broken," Romney said, "and makes it much harder for those that are elected to try to remove things that we think are inappropriate from the spending accounts. I can't tell you why it happened that way, but I can tell you there's a growing concern on the part of senators, and I'm sure it's true in (the House) as well, to see if we can't return to a process that was more amenable to change, as the process was in the past. I would note that those in leadership ... may well like it the way it is because it's an extraordinary amount of power to the four people who negotiate the deal at the very end."

How do businesses qualify for PPP loans?

Romney said the bill, as currently written, slightly changes the qualifications for PPP loans from the March coronavirus aid bill that first established the program. But businesses that received loans before are eligible for more, he said.

Businesses must have 300 or fewer employees and be able to show at least 25% revenue decline from one quarter in 2019 to the same quarter in 2020.

"You will be able to deduct the expenses you've incurred, even if you use PPP money to pay those expenses," Romney said. "So payroll, rent, and so forth, those are still deductible for tax purposes. So that's a big change, and obviously a big improvement. Also, any PPP loans in the amount of $150,000 or less will be nearly automatically turned into grants."

Are extra unemployment benefits in the bill?

The March coronavirus relief bill included a $600 weekly enhancement tacked onto unemployment insurance each week; however, those extra funds expired at the end of July. The new bill includes another enhancement, but only half as much.

Romney said the $300 supplement is scheduled to last through March 14. As of November, Utah's unemployment rate was at 4.3%.

What happens if Trump vetoes the bill?

Romney said on the call that he does not expect Trump to veto the bill, but if he does Romney "would anticipate that we would all rush back to Washington to potentially craft a new piece of legislation and get that signed into law."

"That could slow down the application of all these programs," he said, "but I doubt that's what the president would do."

Congressional Democrats have expressed a willingness to increase the amount of personal checks to Trump's desired $2,000.

"I can assure you, our Democrat friends are very happy to spend additional funding," Romney said. "Let me note, however, if we went from ($600) to $2,000 per person, the additional borrowing would be almost $500 billion. And someone's got to pay for that."

If no spending bill is passed and signed into law, large parts of the federal government will shut down beginning Monday for lack of funds.