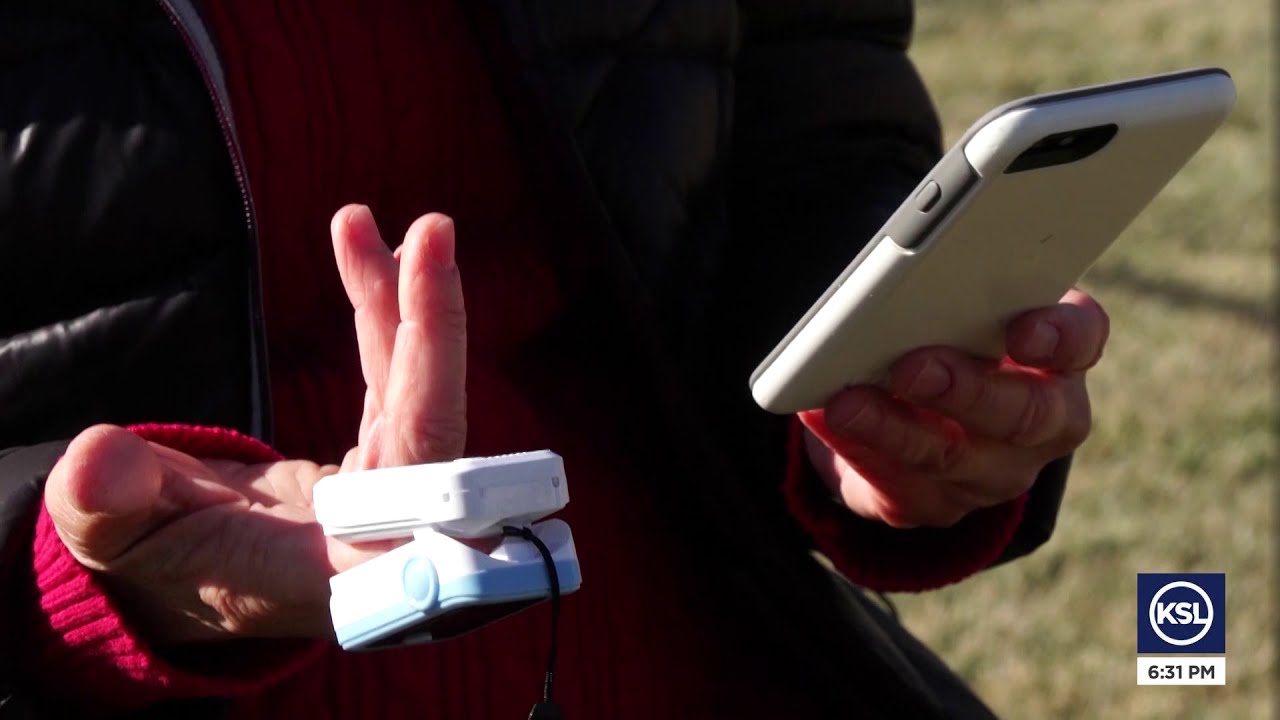 AMERICAN FORK — As hospitalizations surge, Intermountain Healthcare has found creative ways to care for some patients without placing unnecessary burdens on the health care system. One Utah woman is grateful she was able to be monitored from the comfort of her own home when she got COVID-19.

Valerie Jackson, 71, lives alone. When she got COVID-19 in early September, she was miserable. "I had I think almost every symptom that I've heard of," she explained, including a 104.8-degree fever, pneumonia and difficulty breathing.

Jackson's children convinced her to go to the emergency room. "My family saved me. They got me into the hospital at a really low point," she said.

When she arrived she found she didn't meet hospital admission criteria because her oxygen levels were not low enough, but doctors wanted to continue monitoring her.

They sent her home with a pulse oximeter, allowing Jackson to measure her own oxygen levels several times a day at home.

Intermountain Healthcare's Dr. Joseph Bledsoe, research director for emergency medicine, calls it the COVID Remote Patient Monitoring Program. He says it's designed for those who don't meet hospital admission criteria but have enough factors that physicians worry about them enough to send them home with additional monitoring.

"If you're sitting at home with COVID and don't know that your oxygen levels are critically low like that, it can be dangerous," Bledsoe explained.

Early on in the pandemic, Bledsoe and his colleagues saw reports from New York and Italy of people with silent hypoxia.

"Typically when a patient's blood oxygen levels drop low, they feel really short of breath and feel terrible with it. But with COVID, for some reason, they were seeing patients who had low oxygen levels, but weren't feeling all that short of breath," he explained.

The patient places the oximeter on their finger and their vitals are reported back to the hospital through an app, which the patient installs on their cell phone or iPad.

"Having that monitor felt like a little friend," Jackson said. "Just knowing that somebody was there noticing my numbers was comforting … and I think it helped my family a ton because they were so worried."

Bledsoe says they ask patients to monitor their oxygen levels at least twice a day.

"I got a little paranoid about it and so I started doing it every hour for a couple days," Jackson said. "They want you to check in regularly and if you don't, they give you a little call and very politely say, 'We need to know about your oxygen, could you please check in?'"

At Jackson's worst, she says she was so sick she wasn't very mentally present and had a hard time taking care of herself.

"I just remember those days as a fog. I didn't eat. I didn't drink. I didn't do anything except sleep," she said. "I would take my Tylenol or Advil, set the alarm again, and sleep for four more hours."

"I got another call that said, you need to go to the ER," she said. Jackson was admitted to the hospital for a few days and eventually sent home with oxygen.

Looking back, Jackson is grateful she had the oximeter to measure her levels because she couldn't tell when her oxygen levels were dropping. "I couldn't feel it. I wouldn't recognize the symptoms of that lowering of oxygen," she described.

Bledsoe says this program is key to the hospital's surge capacity plan. "In that way, we've been able to safely keep some people at home and avoid hospitalization and really help to reserve those hospital beds for those that are most sick," he said.

Today, Jackson is on the mend and her oxygen levels are back to the high 90s. She expressed deep gratitude for her daughter-in-law who came over and cared for her once she was home from the hospital.

She is grateful she didn't have to spend too much time in the hospital, avoiding large hospital bills and instead resting in the comfort of her own home.

"It worked really well for me!" she said. Jackson is thankful to hopefully have many more years with her children and grandchildren.

The program is available through all 22 Intermountain Healthcare emergency departments and will soon also be available at local InstaCares. Bledsoe says they are currently deploying about 30 to 50 kits each day and ordered an additional 10,000 kits to be prepared.

If your insurance doesn't cover the program, Intermountain says it will cover the cost.