Utah nonprofit brings back controversial condoms discontinued by the state

SALT LAKE CITY — A local nonprofit has brought back condoms with suggestive Utah-specific slogans that were previously discontinued by Gov. Gary Herbert earlier this year.

The condoms were part of an HIV awareness campaign launched by the Utah Department of Health in January.

Utah Harm Reduction Coalition relaunched the campaign on their own, without taxpayer money. The nonprofit said it views the branding as positive messaging.

"The condoms, like the ones featured here, were intended to start conversations and embrace sex-positivity," reads their website.

Utah Harm Reduction Coalition helps provide intervention and aid to people in an effort to reduce health and social harms associated with substance use, according to its website. Some of their services include an outpatient program as well as the syringe exchange.

The nonprofit released the condoms on Dec. 1 to celebrate its birthday as a syringe exchange, in addition to World Aids Day.

In January, Herbert asked the health department to stop distributing the condoms shortly after the campaign was released.

"The designs did not go through necessary approval channels and we have asked our partners to stop distributing them immediately," a January statement issued from the health department said. "We regret the lewd nature of the branding." 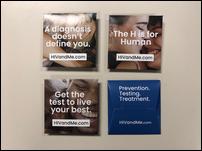 The condoms were being distributed at Utah's 13 local health departments, at the University of Utah, the Utah AIDS Foundation and at other community locations and LGBTQ organizations, according to the health department.

When the condoms were discontinued in what Utah Harm Reduction Coalition dubs "condom-gate," Herbert said in his monthly PBS news conference in January that the condoms would be OK at a novelty shop in the private sector, but "government ought not to do something that many of the people think is offensive."

The condoms are listed on Utah Harm Reduction Coalition's website and are expected to ship within 2-3 weeks after purchase, according to the site.