Utah monolith (probably) wasn't the work of aliens, but it's still a mystery 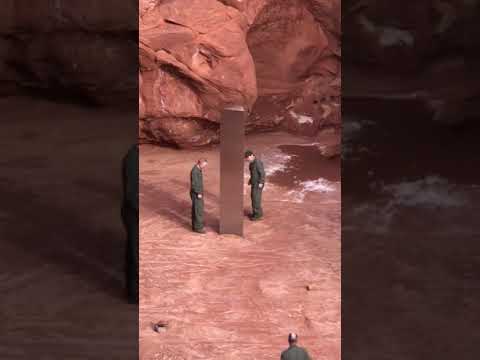 We still don't know who made the tall, metal rectangle or why they stuck it among the red rocks, where it was discovered this week in a helicopter flyover by Utah Department of Public Safety employees (they were counting bighorn sheep).

And though comparisons were quickly drawn to the fictional monoliths of film auteur Stanley Kubrick's "2001: A Space Odyssey," we can safely say this real-life monolith was not the work of aliens.

Still, it's a fittingly mystifying symbol in a year that's often felt stranger than fiction. And while we may eventually learn more about the artwork's origin, any piece of Kubrick-inspired art should leave some questions unanswered, said I.Q. Hunter, a film scholar and De Montfort University professor.

"The Utah work is a slice of the future set in a prehistoric past, absolutely alien and incomprehensible in the landscape," he told CNN. "It would be a pity if we discovered what the Utah sculpture was, as that would lessen its mystery."

We still don't know. No artist has publicly claimed it, and when Utah officials stumbled upon it, it was unmarked.

But we can safely assume the artist was not an alien — humans are clearly capable of building rectangular pieces of art, said Jason Wright, a professor of astrophysics at Pennsylvania State University and the director of the university's Extraterrestrial Intelligence Center.

"This monolith is clearly the sort of thing humans can (and do!) make, in a place where humans go," Wright told CNN. "Indeed, desert art is common in the American Southwest, so I don't see any reason to think it's anything other than that."

While it clearly resembles the monoliths of "2001: A Space Odyssey," it's also reminiscent of minimalist artworks popularized in the 1960s by artists like Donald Judd and Robert Morris, Hunter said.

And if "2001: A Space Odyssey" had never entered the public consciousness, Hunter said, we likely would never have questioned whether a simple geometric figure was placed on Earth by extraterrestrial life forms.

Still, Hunter said, the fact that it was hidden in the wild is bizarre.

Official statement: "Although we can't comment on active investigations, we would like to remind public land visitors that using, occupying, or developing the public lands or their resources without a required authorization is illegal, no matter what planet you are from."

Why is it in the Utah desert?

Hunter has a theory — parts of "2001" were filmed in Monument Valley, along the Arizona-Utah border, he said, so it's possible the artist wanted to honor the film and place the real-life monolith in a similar locale.

And in the film, the monolith was usually out of place — in prehistoric Earth and buried on the Moon, Wright said. And like the fictional monoliths, this one certainly cuts a harsh, industrial figure against the rugged red rocks.

What does it mean?

Like all great, puzzling art, it's up for interpretation. Because no artist has claimed it, people are dreaming up their own explanations (read: aliens).

Whatever its intended meaning may be, the silver quadrilateral has been widely interpreted as an homage to the monoliths in Kubrick's film. Onscreen, the monoliths were large black rectangles that acted as a sort of beacon or communication device. It elevated the consciousness of all who touched it and drove evolution forward, Hunter said.

As far as we know, touching the monolith did not have the same effect on Department of Public Safety employees who investigated it by standing on each other's shoulders. But, as in the film, it's a deceptively simple object whose meaning has left critics divided.

The Department of Public Safety in Utah didn't respond to CNN's request for comment. It has not yet revealed its plans for the figure. However, in a news release issued on Monday, the state's public safety department said it is illegal to place works of art on federally managed public lands. That means the monolith could be removed.

"The Bureau of Land Management will be determining if they need to investigate further," according to the news release.

It would be a pity if we discovered what the Utah sculpture was, as that would lessen its mystery.

Hunter said he thinks the monolith should remain among the rocks in all its confounding glory.

"It's a great homage and it should retain its mystery."

If it stays there, confusing bighorn sheep and visitors alike, it could become a pilgrimage for fans of the film.

Hunter also said he's still holding out hope that aliens will claim it as their own.

Despite — or because of — the secrecy surrounding the discovery and its similarity to the alien monolith from the 1968 film "2001: A Space Odyssey," the structure is prompting speculation, worry and skepticism on social media, such as these comments to the Utah Highway Patrol's Facebook post: