SALT LAKE CITY — The Salt Lake Police Civilian Review Board has determined that the two officers who shot and killed Bernardo Palacios-Carbajal did not violate department policy in their use of deadly force.

In their decision announced Tuesday afternoon, the panel “exonerated” officers Neil Iversen and Kevin Fortuna, saying they did not use excessive force when they fired 34 times, hitting Palacios 13 to 15 times in the back and side. Under the board’s definition, exonerated means “the employee’s actions were reasonable under the circumstances.”

The ruling comes less than a week after Salt Lake County District Attorney Sim Gill determined the shooting was legally justified and no criminal charges would be filed against the same officers.

“I recognize that this outcome, as well as the determination by District Attorney Sim Gill last week, is upsetting to many who want to see change in not only the state’s use of force standards, but also with the way our city approaches policing,” Salt Lake City Mayor Erin Mendenhall told KSL. “The outcomes of this case do not close the door on the movement of building equity and uprooting systems of oppression that exist throughout local, state and national government.”

The police Civilian Review Board “provides civilian oversight regarding the excessive use of force and other complaints, and internal police investigations conducted by the police,” according to its website. The board is comprised of 14 members, or two members from each of the city council’s districts.

In its 26-page report, the board echoed the findings of Gill’s office that Palacios seemed more interested in hanging onto his gun rather than getting away from police.

“It was unusual that a person who was fleeing to get away from law enforcement officers, and who had slipped/tripped to the ground repeatedly, would take time to retrieve an object rather than just continue to attempt his escape,” according to the report.

As Palacios was running from officers, he tripped or slipped to the ground three times and made a conscious effort each time to pick up his gun.

When officers Iversen and Fortuna confirmed after the third fall that Palacios was holding a gun, they fired six to eight rounds each, according to Gill. When he dropped to the ground after being shot, Palacios rolled from his stomach to his back and appeared to point the gun at officers, who opened fire a second time, Gill’s report stated.

The Civilian Review Board notes in its report that “Mr. Carbajal was found deceased at the end of the incident with a fully loaded semi-automatic handgun on his lap with the barrel pointing ‘down range,’ the direction officers Iversen and Fortuna had been standing.” 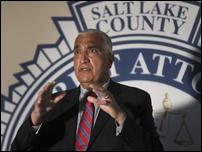 Four days after finding that the fatal shooting of Bernardo Palacio-Carbajal was legally justified, the district attorney is proposing state law be changed.

The board also noted that officers are trained to shoot until the threat is over, which is in accordance with the department’s deadly force policy.

“Additionally, in their firearms training, officers are generally trained to shoot twice and assess. There can be situations that the threat is so immediate, and the subject’s actions are a continuing threat, that officers will fire more than twice. This action of firing more than twice is not a violation of the Deadly Force Policy in any jurisdiction but is generally more an indication of an incredible perception of an ongoing threat or they, in a time of extreme stress, forgot their training,” the board wrote.

While the officers were not in violation of department policy, the board “strongly urges the SLCPD to review their firearms training policies and modify, update or emphasize the widely held training guideline of fire twice and assess.”

The board also looked at whether the officers could have used less lethal force, such as a Taser, baton, pepper spray or simply tackling Palacios. The board concluded that less lethal force in this case was not a viable option.

“In this case, both officers positively identified the object in Mr. Carbajal’s hand as a gun, and they had seen him stumble repeatedly and take time to retrieve it prior to continuing his escape. As the officers stated, they had witnessed Mr. Carbajal take the time to retrieve the object twice, time wasted in escaping, and then after the third fall, they knew it was a gun. One must ask themselves what the officers believed Mr. Carbajal was intending to do, based on his actions,” according to the report.

The Civilian Review Board report, along with Gill’s report and the findings of an internal affairs investigation, all now go to Salt Lake Police Chief Mike Brown for review. Based on all the reports, Brown will decide what action, if any, should be taken against the officers involved, and if there are any changes are needed for his department such as additional training.

Members of the Palacios family and their attorneys criticized Gill’s decision to find the shooting justified, believing he should have charged the officers and let a jury of their peers decide in court what should happen to them.

This action of firing more than twice is not a violation of the Deadly Force Policy in any jurisdiction but is generally more an indication of an incredible perception of an ongoing threat or they, in a time of extreme stress, forgot their training.

“(Palacios) was never a threat to the police. And to now go back weeks and weeks later and reconstruct the version of events, that at the last second he rolled over and was going to shoot them, we don’t believe is going to play out,” attorney Brian Webber said at a press conference on Thursday.

“Should he have been running? No. What do you do to a suspect who runs? You apprehend them, you bring them in, you charge them, they go to trial. You don’t kill them. You don’t shoot them in the back.”

The shooting has also sparked a call for changes to Utah’s use of deadly force statute for police officers.

“Our laws, at every level, should evolve and are designed to do so. This is the work ahead of us. Change will come to our city and I commit, again, to making Salt Lake City more equitable, more safe, for all,” Mendenhall said.

The mayor also noted that the board’s report gives advice to Brown “who is authorized, by state statute, to use such feedback in determining any internal disciplinary measures to be taken.”

Gill himself released an open letter on Monday to state lawmakers with suggestions on how to change the law. He made 22 suggestions that he hoped would “provide many alternatives and points for discussion and debate in support of a crucial and long-delayed examination by policymakers, at all levels of government, of the appropriate balance between the sworn obligation of law enforcement to protect the public, on the one hand, and the constitutional and human rights of our residents and communities, on the other hand.”