Paul Petersen pleaded guilty in federal court in Arkansas to conspiracy to commit human smuggling, the third guilty plea he's entered for the scheme. Petersen, a Republican who served as Maricopa County, Arizona's assessor for six years until his resignation in January, pleaded guilty in Arizona and Utah to smuggling and fraud charges last week.

“This plea agreement is one more step on a long road towards putting an end to the illegal adoption practices that have long plagued the Marshallese community in our district,” David Clay Fowlkes, the acting U.S. attorney for the Western District of Arkansas, said in a statement. 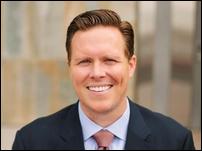 The dozens of women from a tiny Pacific island nation drew little attention as they traveled to Utah.

Petersen is accused of illegally paying women from the Pacific island nation to come to the United States to give up their babies in at least 70 adoption cases in Arizona, Utah and Arkansas over three years. Citizens of the Marshall Islands have been prohibited from traveling to the U.S. for adoption purposes since 2003.

Petersen was indicted in Arkansas last year on multiple fraud and smuggling charges. He pleaded not guilty to the charges in October. Under the plea agreement approved Wednesday, prosecutors said they would move to dismiss the remaining charges against Petersen after he's sentenced.