There, I said it. It felt good to finally put into words what has been my reality for the past several weeks.

No, trampolines cannot improperly cleanse a behind. No, they aren't designed to break apart easily in water (although some break down more easily than others).

While both toilet paper and trampolines can bring a feeling of satisfaction in their own way, there is only one real relation between the two, and it's this: Much like the toilet paper that was nonexistent from grocery store shelves just a few months ago, the same has happened with trampolines. And they're not just out of stock in stores, but being sold on online platforms for inflated prices. Used ones are going for more money than pre-pandemic prices of the same models brand new.

How do I know this, you ask? Well, because we recently moved, leaving behind our beloved trampoline with the thought that it would be simple to replace. Oh, how wrong we were.

Due to droves of kids being forced to play in their own backyards this summer, trampolines are being snagged up as soon as they hit the stores. And the opportunists who see a chance to make easy money are highly concentrated among those of us trying to buy one.

Yes, I understand the concept of supply and demand, and free market capitalism — yada, yada, yada. But for goodness sake, be a good human! If you have no use for a trampoline, don't buy one. If you have one, try to sell it for a reasonable price. There are children and parents who just want to sail through social distancing without ripping each other's heads off, and in my world a trampoline is a solution to that problem.

In my search for a place for my children to jump, flip and bounce that did not include their beds and my brand new couch, I found myself scouring the local marketplace. I became a predatory hawk of all things resembling a trampoline. I even considered welding pieces of iron together to build my own because, after all, I did pass shop class, and part of that included using a blow torch, a piece of iron and a soldering stick.

Thankfully, persistence worked in my benefit and I did not have to rely on my seventh-grade knowledge that was not all that good to begin with. I found a person selling a good quality trampoline just a few miles away. This individual was moving and was not seeking to capitalize on the current dip in supply. Due to this, we both left feeling like we had gotten a good deal — which is the way it should be.

Sadly, I must admit that even after purchasing a trampoline, when my Facebook news feed showed me one that was for sale for a reasonable price in my area I thought about buying it because they were so rare. Why not stock up on trampolines, right?

But trampolines are not toilet paper, and having more than one is a bit on the extreme side. Thankfully, I came to my senses quickly and did not take away another family's chance to experience the joy of having a piece of bouncy heaven in their very own backyard.

Alas, trampolines are not the only things that are resembling the toilet paper of yesterday. Don't get me started on bikes and basketball hoops.

What is your "new toilet paper?" Let us know in the comments. 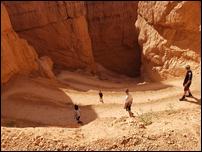 'The world is changing': How national parks can remind us of the good

On a recent visit to Bryce Canyon National Park, my family was reminded that despite world unrest and turmoil that there is still good in the world.
×