OGDEN — People lined the streets of Ogden for a rolling vigil Thursday night paying tribute to a slain officer hailed as a “son of Ogden” who died protecting the hometown he swore an oath to serve.

Ogden police officer Nate Lyday had served only 15 months on the job when he lost his life. He will be buried Saturday, the day on which he and his wife, Ashley, would have celebrated their fifth wedding anniversary.

Lyday was shot and killed May 28 while responding to a domestic violence call in the 300 block of Jackson Avenue after a woman called 911, saying her husband was trying to kill her.

An Adult Probation and Parole agent was also shot and wounded, but survived.

Ogden Police Chief Randy Watt thanked all those who took to the streets and gathered together at Lindquist Field to remember Lyday Thursday night.

“As we drove on the route of the vigil tonight, we had the opportunity to see the outpouring of love for Nate and his family,” Watt said.

He asked the crowd to remember the officer.

”This night we honor Nate and all he stood for.”

Sherry Dagsen teared up as the procession passed her. She and her husband, Robert, are friends with the fallen officer’s sisters. 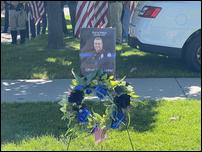 A report released by the Weber County Attorney’s Office Wednesday sheds light on the final moments leading up to the fatal shooting of 24-year-old Ogden City police officer Nathan Lyday.

Retired Ogden police officer Ross Miller sat in a chair next to a flag to watch the procession pass.

“This was my neighborhood,” he said, pointing to the line of houses along Custer.

He noticed the difference in society, today, compared to when he was an officer.

“It is definitely a lot different,” he said of work in law enforcement.” If it was like it is now, I probably wouldn’t have hired on. There’s just no respect.”

Debbie Warden also came out to show her admiration for Lyday.

“We are from Ogden, born and raised,” she said. “We appreciate the police department and what they do. We are saddened by the loss of an officer and came to remember the sacrifice he gave.”

The rolling vigil proceeded to McKay Dee Hospital — where Lyday was born and where he was taken after the shooting — moved past the high school he graduated from, Ogden High, and rolled by the city’s Municipal Building, which had a thin blue line lit across its exterior. That line is a reflection of courage and a tribute to those who have fallen in the line of duty.

The trees and shrubs around the municipal building, which housed the Ogden Police Department, were lit up by thousands of blue lights.

“We are just heartbroken at the tragedy. We want the police department to know we support them and the sacrifices they make,” said Hannah Cortez, who was standing in front of the municipal building with her husband, Isaac.

Lyday’s car was decorated with flowing wreaths of flowers and was draped with the U.S. flag. It was loaded on a flatbed trailer and carried as part of the procession, which also included Ogden police motorcycles and patrol vehicles, as well as Lyday’s family.

Approximately 2,000 blue LED candles were distributed to residents as part of the rolling vigil, and people were also encouraged to bring their own candles to pay tribute.

Lt. Brian Eynon said Home Depot stores along the Wasatch Front scoured their supplies of blue LED lighting to donate in memory of Lyday, who was just 24 when he died.

The procession ended at Ogden’s Lindquist Field, where Lyday’s patrol car will remain throughout the duration of the funeral services. His image will be projected on the clock tower at the field, and officers will stand constant watch over his vehicle.

The funeral is planned for 11 a.m. Saturday at the baseball stadium. There will be limited public seating due to the coronavirus pandemic. Another procession will escort Lyday’s body to Lindquist’s Memorial Gardens of the Wasatch, where a graveside service will feature full police honors, including an honor guard ceremony, flyover and final radio call.

Lyday, according to the Officer Down Memorial Page, is the ninth Ogden police officer to die in the line of duty.

The first fatality was that of Capt. William Brown, who was also felled by gunfire on April 30, 1899. The last Ogden officer killed before Lyday was officer Jared Francom, who was assigned to the Weber-Morgan Narcotics Strike Force was shot and killed during a drug raid on Jan. 5, 2012. Ogden’s public safety building now bears Francom’s name.