Ethan Robert Hunsaker, 24, of Layton, was charged with the first-degree felony in 2nd District Court.

On May 24, Hunsaker called emergency dispatchers about 3:20 a.m. “and reported that he had killed someone. He also provided his address and stated that he did not know the person he had killed and had met the person on social media,” according to charging documents.

Officers responding to 1319 N. Reid Avenue found Ashlyn Black, 25, of Layton, on her stomach in a bedroom, the charges state.

Hunsaker told investigators that he choked and stabbed the woman — whom he had just met on the dating app approximately six hours earlier — to death with a knife, the charges state.

Charging documents, however, do not give a possible motive for the crime.

“Ethan woke up with Ashlynn laying on his left arm as they were cuddling or spooning. Ethan stated he choked Ashlyn as hard as he could for about one minute. Ethan stated Ashlyn was fighting him and was trying to pull his arms away from her neck. There are marks on Ethan’s arms, neck, and shoulder area supporting the fight between Ethan and Ashlyn,” the affidavit states.

Hunsaker then got a pocket knife with a four-inch blade and stabbed her between five and 10 times, according to the affidavit. 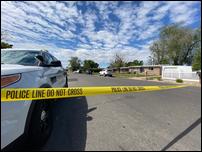 “He stated the date was a normal date and there had been no argument with Ashlyn that would cause him to kill her. Ethan stated he has daily thoughts of suicidal and homicidal ideations. Ethan has been diagnosed with mental health illnesses and is on prescriptions for those illnesses,” according to the affidavit. “Ethan has recently thought of ways to kill and kidnap others. Also expressed the desire to have police kill him.”

On Monday, Black’s family issued a statement and asked for privacy.

“A monster has taken away the life of our little girl in a crime as senseless as it was evil. Our hearts are broken and our lives are forever changed due to the despicable acts of another person. In just a few senseless and selfish minutes, a life of an amazing, fun loving young woman was taken, one who had a passion for being the voice of those who could not speak out for themselves,” the statement said.

Prosecutors have requested Hunsaker be held in the Davis County Jail without bail.

Hunsaker has no significant criminal history in Utah, according to court records.

KSL.com does not assure that the money deposited to the account will be applied for the benefit of the persons named as beneficiaries. If you are considering a deposit to the account, you should consult your own advisors and otherwise proceed at your own risk.