Arianne Brown: Why falling short of a goal (even a lifelong one) isn’t so bad

SALT LAKE CITY — It was the morning of the U.S. Olympic marathon trials, and I woke up bright and early in my hotel room. I got my running clothes on in preparation for the long miles ahead that I knew had the potential to be awesome or brutal. I had no real goal for this run, except to make the best of the time I was given.

"See you in an hour," I said, as I closed the door to our 12-passenger van after having been dropped off at the UNLV track by my husband. There would be no Olympic marathon trials for this mom — only 10 miles of seemingly endless laps on that Las Vegas track before heading to my son’s soccer game that same morning.

But it wasn’t a soccer tournament that kept me from going to Atlanta that day. I didn’t even qualify, nor did I give it an honest effort to do so. But I did have aspirations of running at the trials in the years leading up to them.

As a former collegiate track and cross country athlete and sub-3-hour marathoner (several times over), I have thought about committing to a training plan and just going for it. I’ve looked at other moms who have managed to find a way to do it all and thought that if they could do it, then certainly I could, too.

Yet, for some reason or another, I haven't found the time or drive within to do it. And at 37 years old, I fear my time is up.

The rest of the day, I enjoyed watching the soccer games and got another workout in chasing and lugging my four younger boys around in wind that no doubt mirrored that of what the runners experienced in Atlanta. However, my thoughts weren't far from what else I could have been doing that day. I saw post after post of friends and familiar names who had managed to make it all work. They were there having an experience of a lifetime and would have the memories to share for the rest of their lives. They were there making their families proud.

More than anything, I learned that the power of contentment is great, and being happy right where you are is what keeps you happy — even if it's running 10 miles alone on a track in Las Vegas.

The icing on the cake was reading a headline from a story published in Runner's World about another mom of nine from our very own state, who is my very same age, who competed at the trials. The story was titled, "After Trauma, Mother of Nine Qualifies for Olympic Marathon Trials."

I'm ashamed to say it, but I turned into a jealous girl — you know, the kind that you teach your daughters not to be? "That's my headline," I thought. "She stole my headline."

But, as I read her story, I found that while we may share a few things in common -- namely our collegiate running background, age, number of children and having our own and very different traumatic experiences — her story was not my own. The words of the story brought me in, and I found myself wanting to know more about her.

The rest of the week, I found myself reading stories of other women who ran at the trials — several more of them from our state. Runner’s World highlighted St. Geroge’s Ashley Pauslon for using Cheetos as pre-race fuel, and the Deseret News published a story about Ogden’s Merrilee Blackham, who ran the trials at the age of 42.

As I read, I found myself learning lessons that I should have learned long ago. I learned that:

More than anything, I learned that the power of contentment is great, and being happy right where you are is what keeps you happy — even if it's running 10 miles alone on a track in Las Vegas.

Have you had moments when you've fallen short of your goals in your adult life? What have you done to overcome disappointment? Let us know in the comments. 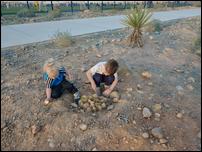 "Boys will be boys" was a phrase that was uttered several times over as three of my younger boys walked through a rock pile riddled with cacti and who knows what else. While that was an all right response, the popular idiom applies to so many other great things about boys.
×