NEW YORK (CNN) — States with the highest rates of melanoma cases linked to ultraviolet radiation are spread across the United States on the East and West coasts, in Hawaii and in landlocked states like Utah, according to a study published Monday in the International Journal of Cancer.

It is also the deadliest type of all skin cancers and linked to UV radiation exposure in nearly 95% of all cases in the United States. It's potentially preventable, because diagnoses are associated with "excessive sun exposure and indoor tanning," the authors said.

The strength of ultraviolet radiation is generally measured by UV index and is higher in the United States closer to the equator, including Southern states, California and Hawaii, researchers said.

To determine the number of UV-linked melanomas per state, researchers compared cases between 2011 and 2015 with a baseline of expected cases. They used historical data between 1942 and 1954 from melanoma incidence rates in Connecticut, which was the first state with a population-based cancer registry, to come up with a baseline for measurement.

"Indeed, prior to substantial increases during the last 5 decades, melanoma incidence rates in Connecticut were low, less than 2.3 per 100,000 people before 1955," the study authors said.

The study found overall that UV exposure in the United States accounted for 91% of all melanoma cases diagnosed from 2011 to 2015 and that 94% occurred in non-Hispanic whites.

The rate among non-Hispanic whites specifically varied among states, ranging from 15.1 per 100,000 in Alaska to a high of 65.1 in Hawaii.

"To highlight state differences, researchers highlighted results for non-Hispanic whites rather than the total population, because a lower burden in some states could largely reflect higher proportions of non-whites in the population," the study authors said. Melanoma incidence rates in the United States are lowest in blacks at 1.0 per 100,000 of population and are also substantially lower in other minorities with 4.5 per 100,000 in Hispanics compared to 27.2 per 100,000 for non-Hispanic whites, scientists said.

The states with the highest UV-attributable incidence rates among all residents were: 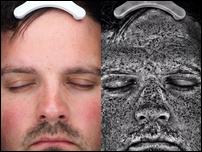 Study: Seeing how sun exposure damages skin could prompt people to use protection

Melanoma is on the rise, and it is no secret that Utahns are particularly at risk.

The study found improved strategies for sun protection, such as increased use of sunscreens and limiting activities in the sun to mornings or later afternoons, are needed to modify behaviors.

"The burden of UV-attributable melanoma is considerably high in all states, underscoring the need for broad implementation and enforcement of preventive measures across states to reduce UV radiation exposure from excessive sun exposure and indoor tanning, with priority for states with a higher burden," the authors concluded.