Arianne Brown: A 'mom' wardrobe is nothing to be ashamed of

SALT LAKE CITY — It was a pretty average morning. I was getting breakfast made for the kids before they went to school, and making sure all nine of them were up to eat said breakfast, when an argument erupted.

With seven boys and two girls, the vast majority of the feuds come from the rough-and-tumble-smack-down of testosterone in all its budding varieties. This time, it was my daughters who were arguing over, you guessed it: clothes.

"You’re wearing my white Vans," one daughter said. "I found them first and they match with my outfit," the other said. Both continued to debate over which outfit went better with white shoes.

Any clear-thinking human would know that white shoes match with anything and are totally impractical to wear anywhere, especially on a wet, wintry day like this one was. So, I interjected.

"I don’t think either of you should wear them today," I said, citing my obvious reasons why.

"What would you know, Mom?" one daughter said. "Look at what you're wearing."

The next couple of minutes were spent letting me know that I was old and didn’t care what I looked like. One daughter even offered her wardrobe to me if I needed anything to wear. It was all in good fun, and I can dish it as well as I can take it — and I sure did take it.

After getting pelted with insults — some of which had me snorting a good laugh — I did what any good mother would. I drove them all to school In my gray sweats, lime green top, slip-on shoes and high ponytail bun, without having so much as glanced in the mirror or at my own reflection in the microwave door.

Why did I do that, you might ask? It's simple: After years of sacrifice, I have earned it.

In my early mothering years, I would’ve never thought that I’d have a wardrobe that consisted of nearly nothing considered stylish. Fresh out of college with my "grown-up" job, I was the hip mom that my infant son and equally as hip husband could take anywhere.

Being a mom with very few clothes in her wardrobe doesn’t show my lack of care. Rather, it shows that I care tremendously about whether my kids have enough to eat and can participate in activities of their choosing.

Over the years, however, all that has changed.

The new pair of jeans that I at one time had to have, has now been replaced with the pair of jeans each of my kids had to have. The new blouse that looked so great on the mannequin, and I knew would look great on me, stays there because one of those shirts is equivalent to seven gallons of milk and, depending on the day, the same amount of gasoline.

There was a time when shoes were my thing, and dropping a few Jacksons or a Benjamin on a pair wasn’t anything I thought twice about. Now, I assess whether the amount of toe that pokes out of my shoe is really all that noticeable before heading out in public. My hair that I haven’t had professionally trimmed or highlighted in a good 7 or 8 years may be one for my record books, but I wear it with pride the best I can.

Sure, there are clothes I save for the occasion that I get out with my husband or in a planned public outing. My years of trimming, cutting and styling my children’s hair have taught me a thing or two about my own hair maintenance. Generally speaking, though, things in my limited closet space are slim pickings.

Being a mom with very few clothes in her wardrobe doesn’t show my lack of care. Rather, it shows that I care tremendously about whether my kids have enough to eat and can participate in activities of their choosing. My tattered running shoes that I have worn for several years now are a source of pride that I am holding tight to with each new purchase of soccer cleats for my boys or a new leo for my girls.

I’d be lying if I didn’t say that I hope one day I will look a bit more put together; but for now, it is what it is. And the next time my girls argue over clothes, I may very well walk them to school in the clothes that, at this time in my life, I am proud to adorn. 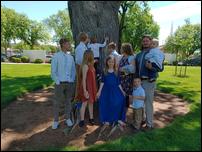