Arianne Brown: What I learned from reading the comments (even the troll ones)

SALT LAKE CITY — It was the fall of 2013 and I took my five kids to the store, got offended, and then wrote about it for KSL.com readers. The offense? Well, they were recurring offenses that consisted of people saying, "You've got your hands full," or asking, "Are they all yours?" at a time when I was a bit on the frazzled side.

Apparently, my experience struck a chord and the article went viral, with 95 comments to boot. Many found it funny, which is partly what it was meant to be. Others agreed with me and felt my words said exactly what they were feeling. Some sent notes of support, letting me know it would get better. Then, there were those who thought I should take a chill pill. 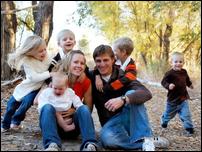 The things people say to a frazzled mom — but shouldn't

When large families are seen in public, onlookers often respond by saying thoughtless and oftentimes hurtful comments. In this article I address this issue and suggest ways to encourage and comfort the often struggling mother.

Over six years later, those kids are now tweens and teens, and I have added four more little ones to the mix. And while I have learned to avoid stores like the plague, mostly due to my angst of overspending my limits if I'm presented with tangible options, I am forever grateful to all the commenters. In fact, I am grateful for all the comments on each of the articles I have written over the years. Every. Single. One.

To those who have agreed with me in my moments of frustration: Thank you for validating that sometimes it's hard being a parent, and you just want to scream it out loud before you boil over. After all, letting steam out is preferable to an explosion, so I thank you for being the air to welcome my water particles.

To those more seasoned parenting veterans who have given support by letting me know that things would get better, I am forever grateful. It's people like you who cast no judging eye, but only empathy and hope. I may not have believed you at the time, but now I know that these things improve with time. Thanks for being my mentors.

And I must say, that while chill pills are hard to swallow, they are well worth the effort.

Now, to all you naysayers whom I named as trolls and whose blunt words I cursed daily — I even blamed you for sleepless nights and my badly injured ego: Thank you for showing me the other side of the coin so I could see that there was an opposing view to mine. Thank you for opening my world to understanding beyond my very small and often distorted lens.

And I must say, that while chill pills are hard to swallow, they are well worth the effort.

As the new year begins, and a new column commences, I look forward to writing what's on my mind. Steam may spurt out my nostrils and ear holes. Deep thoughts after late nights with teens and toddlers may ramble aimlessly. Funny moments that take place in a home with nine children are likely to come to life in word form for your evening reading enjoyment.

I can't promise you'll agree with the words I say, but I can promise I will respect and value your opinion.

More than that, I promise to choke down my daily chill pill and parent like my hair is on fire — whichever one gets the job done. And I invite you to continue with me on my journey through motherhood one column at a time.