“This is, in my opinion, the Utah Republican Party dream team,” Wright said, citing Bishop’s influence in Washington, D.C., as well as his background as a teacher and experience with rural issues.

Bishop, who said last year he would leave Congress at the end of his eighth term representing northern Utah in Washington, ruled out his own run for governor Monday and endorsed Wright as a candidate who “brings some fresh experience,” saying he would consider the No. 2 spot on the ticket.

GOP Gov. Gary Herbert has been in office for more than a decade and is not seeking reelection

“I don’t think I was willing to put in, like, the time and effort to be a governor that has to do everything,” Bishop said. “The kinds of ideas that Thomas has about what he would like to do, which will be time consuming, I’m excited about. I endorsed him first and then he came back afterward and invited me to be part of the administration.”

Bishop said he will bring experience that goes back to his first run for the Utah Legislature at 26, and he is excited about a role that will allow him to go back to Washington to deal with federal issues on behalf of the state, as well as dealing with state lawmakers. 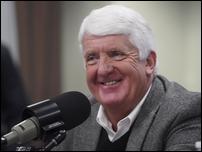 Rep. Rob Bishop, R-Utah, who’s already decided not to run for another term in Congress, announced Monday he is not getting in the governor’s race, either.

“It’s not that I’m going to be the secret power behind the throne. I am fully cognizant that I am in a support situation and that I can add some of those elements to help out,” Bishop said. “It’s not that I’m imposing my will on him. A lot of our concepts are very similar. ... I feel comfortable having that kind of role.”

It is unprecedented, he said, for a gubernatorial candidate to name a running mate this early. The primary election isn’t until June, and all of the Republicans in the race could end up on the ballot, either through gathering voter signatures or winning advancement at the GOP state convention — or both.

“In the past, lieutenant governors were selected to secure a nomination. I think what he is trying to do is say you should be voting for him to secure better government,” Bishop said. “Which is an entirely different way at looking at the selection process, and I also think it probably will spur other people to do it earlier, too.”