Snowpack levels above average as storms continue to hit Utah

SALT LAKE CITY — The snowfall this winter in Utah has been just what the state needs, even if people are sick of driving in it and shoveling it. A snowy weekend spilled into a snowy Monday morning, and forecasters said it’s not ending anytime soon.

“Our flow has been nothing but exceptional. We’ve had one storm after another. It just continues,“ said Brian McInerney, a hydrologist with the National Weather Service.

A progressive storm cycle coming off the Pacific Ocean has delivered snow for the past couple of weeks, he said. In the fall, a high-pressure system dominated our region and kept storms away until late November. Since then, we’ve had steady storms with few long breaks.

“We’ve had two-and-a-half weeks of consistent storm activity. People are probably tired of shoveling snow in the mountains but the skiers are loving it and the water people are loving it also,” McInerney said.

“The key is, high pressure is not the dominant weather feature over the western US, this year,“ McInerney said.

When high pressure dominates in our region, Utah ends up with inversions on the Wasatch Front and suffers from the poor air quality that comes with that.

“You see a lack of snow, a lack of storms, and we haven’t had any of that this year,” McInerney said. That’s what led to the driest year on record two years ago.

Fortunately, McInerney said, the high pressure is not going to settle into our region anytime soon.

He said the most impressive aspect of the weather we’re having right now is how long it’s lasting.

“The biggest takeaway is that it’s unending,” he said. “We started this about 10-to-14 days ago and it’s going to continue through the third week of January.”

He said it will continue just like we’ve seen: more periods with intense snow and high winds, punctuated by short bursts of milder weather.

How usual is this stretch of weather for the Wasatch Front?

“Now, what we see with a warming climate is our storms are more intense but they’re less frequent,” McInerney said. 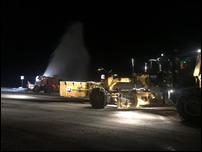 A quick-moving winter storm will bring some wet weather to northern Utah valleys Tuesday, but it isn’t expected to impact rush hour driving.

It’s been serious weather whiplash for much of southern Utah.

St. George went through a record-breaking 155-day period without precipitation earlier this year, but last year was the second wettest year on record for the city.

This winter, the region has been picking up above-average moisture.

“It went huge all the way through the winter, into the spring, and then the flow shut off for most of southern Utah,” McInerney said. “We didn’t see any monsoon flow to speak of and that continued all the way through October. Now they’re back into it.”