NORTH SALT LAKE — Northbound Redwood Road is reopened at I-215 in North Salt Lake after a semi rollover that closed traffic for most of Sunday afternoon, the Utah Department of Transportation said on Twitter.

South Davis Metro Fire said on Twitter that no one was injured in the wreck. The department advised drivers to use an alternate route during as the road was being cleared.

The accident comes just one day after a tanker carrying butane tipped over in Lehi and shut down the highway in both directions for about 10 hours. 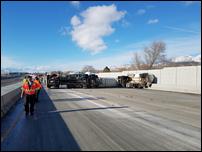 I-15 reopened in Lehi after tanker tips over, causing traffic backup for hours

An 18-wheeler carrying flammable fuel tipped over on I-15 in Lehi, blocking the northbound lanes and closing the highway in both directions near 1800 North.
×