SALT LAKE CITY — Auto emissions per person are on the rise, and Utah is a major offender.

Those findings come from a New York Times report released last month that indicate auto emissions in both Ogden and Salt Lake City are up at least 80% since 1990.

Many experts say the implementation of alternative-fuel vehicles is key to fighting the air quality problem, but it appears that Utahns are hesitant to take that step.

In an analysis released Monday, titled Driving Toward a Cleaner Future: Alternative Fuel Vehicles in Utah, the Utah Foundation examined growing trends of electric vehicles in the Beehive state.

Utah has a 1.60% electric-market share and growth, which is substantially smaller than Colorado’s 2.61% figure.

According to Teigen, there are a number of reasons why Utahns are hesitant to make the switch.

“There’s the idea of running out of power,” he said.

That fear is referred to as “range anxiety” and often is exacerbated by a lack of knowledge about where charging stations are located.

“When you see maybe some of these incentives that are a little bit more front-loaded, those do seem to have a benefit,” says Teigen. 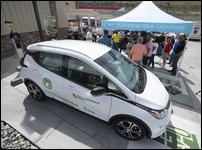 The state's most traveled freeway is among the first in the nation to go "Live Electric."

A federal tax credit, which is up to $7,500 for purchasing an electric vehicle, isn’t issued until the end of the year and may not be enough to offset an initial purchase, which can be about $10,000 more expensive than a traditional option.

Those prices could be trending down though, according to the Utah Foundation.

“The newer Teslas you get, the newer electric vehicles that are out there, you’re getting a better range than you used to,” said Teigen.

The foundation’s analysis also found that large fleet vehicles account for one-third to one-half of Utah’s vehicle emissions, while they only account for around 3% of total vehicle miles traveled.