Former officer in Lafferty case opens up about murders

SALT LAKE CITY — State officials confirmed Monday that infamous death-row inmate Ron Lafferty died of natural causes in prison, prompting many, including a former detective on the case, to look back at the double-homicide that shocked and devastated a family and community.

“I’ll never forget this,” said former American Fork Police Department Cheif Terry Fox. “I’m sitting at home with my family, getting a call that there’s been a double homicide.”

When responding to the scene of a crime, detectives never quite know what they’re going to get. But the motivation for this double homicide isn’t the only thing that stands out in Fox’s mind 35 years later.

“I’ve seen a lot of death in my career,” Fox said. “This one was different in the case, that it was religiously motivated. You can use the word brutal, horrific. And I just don’t throw those out lightly because this was a really, really brutal murder. It was different from a lot of crime scenes in a lot of ways.”

Fox had the responsibility of “gathering the evidence, the autopsies and then I got tasked with cataloging and reading their 8,000 pages of material and stuff that they had written and called revelation and other things they collected.”

Ron Lafferty and his brother Dan claimed God had directed them to kill their sister-in-law Brenda Lafferty and her baby daughter Erica.

“In the crime scene, I could see Brenda was held down and I knew there were fingerprints on her shoulder. But in 1984, no one had ever lifted a fingerprint off a human.”

The case soon took its toll on investigators like Fox.

Neither were his interactions with the Lafferty brothers, as he transported them to and from the courthouse during their separate trials.

“They were just different. They thought they believed in what they were doing,” Fox said. “Make no doubt about it. These were evil to the core men. People can say what they want about them, but they were evil.” 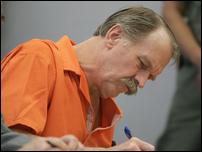 One of Utah’s most infamous death row inmates died Monday, according to the Utah State Prison. Ron Lafferty, who turned 78 last Monday, had apparently been ill for some time.

Both were convicted in 1985 in separate trails. Dan Lafferty was given a life sentence. Ron Lafferty’s conviction and death sentence were overturned, but he was tried and convicted again in 1996 and condemned to die.

He chose death by firing squad.

“Honestly my first reaction was, ‘this is going to save the taxpayers a lot of money,’” Fox said.

Ron Lafferty’s federal public defender Therese Day described him as incompetent and mentally ill and someone who was not treated for his mental illness as he should have been.

Day said Lafferty believed all his attorneys were working against him and that one attorney was his reincarnated sister, possessed by an evil spirit. She said he believed the state, the church and spiritual forces conspired against him. But, Day said, Lafferty never believed he was mentally ill or incompetent.

But no reason could justify the horrific murders of that dreadful day. And, of course, no death can replace the innocent lives lost.

“All those ancestors of Brenda and Erica and all those lives who were touched by this,” Fox said. “Hopefully they’ll get some relief now. I don’t know if you could get comfort. It’s been a long time coming.”

Infamous death-row inmate #RonLafferty died of natural causes today. Tonight, we spoke to a former #AmericanFork Police Chief, who was one of the responding detectives on Lafferty's double homicide back in 1984. @KSL5TV at 10 https://t.co/1Vo3LtR7xg

In a statement, Utah Attorney General Sean Reyes said, “The State of Utah has labored for decades to provide justice for Brenda and Erica Lafferty, who were brutally murdered by Ron and Dan Lafferty. That the wheels of justice turn so slowly in cases like this is cruel and tragic. Now that Mr. Lafferty is facing his Maker, perhaps ultimate justice will be realized and there will finally be some closure for the family of the victims.”