PROVO — A former police vice squad lieutenant convicted of offering to manage a prostitute will avoid prison time but will serve 90 days in jail.

David Moss, 52, of Lehi, was convicted in June of exploiting a prostitute, a third-degree felony. As part of a plea deal on Tuesday, Moss was also allowed to withdraw his no contest plea to sexual battery, and plead guilty to patronizing a prostitute, a class A misdemeanor according to court records.

He was given a suspended sentence of up to five years at the Utah State Prison. Starting Wednesday, Moss was ordered to wear a GPS ankle monitor until Dec. 14. Then he is report to the Utah County Jail on Dec. 15 to begin serving a 90-day sentence, according to court documents.

Moss has 30 days to appeal his sentence.

In February, the Utah County Sheriff’s Office conducted a “human trafficking operation” in Lehi on Valentine’s Day. Moss contacted two undercover detectives posing as prostitutes online and arranged to pay one $150 for “services such as kissing, touching and pleasure that Moss was looking for,” according to a police affidavit.

When he contacted the second undercover detective, Moss stated “he was looking for girls to let him be their manager. He stated he has done this sort of thing in the past and he has a system that is ‘cutting edge’ and avoids people getting caught,” according to the report.

He told them there is a difference between a “pimp” and a “manager,” the affidavit states. 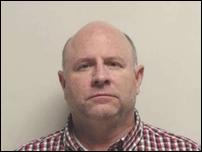 In addition to being a former police officer, Moss was also bishop for a congregation of The Church of Jesus Christ of Latter-day Saints at the time of his arrest and worked for West Valley City government.

Moss was deputy director of West Valley’s Community Preservation Department and also the director of the Animal Services Division for a year, from 2016 to 2017. He resigned from his government position just prior to being charged.

Moss was with St. George police from 1997 to 2012, rising to the rank of lieutenant over the department’s vice squad, according to investigators, but was forced to resign from the department due to sexual misconduct allegations.

Investigators at Peace Officer Standards and Training received a complaint in 2012 regarding allegations of sex on duty involving Moss. He relinquished his police certification in 2013, which according to administrators is the equivalent of having his certification revoked, meaning Moss can never reapply to be a police officer in Utah.