HOLLADAY — Being asked on your first date is an exciting milestone for many young women. For Karsyn West, the occasion gained a much wider audience than expected when a chivalrous homecoming invitation made its way to the wrong house.

“It was kind of late for somebody to be knocking on my door,” she said. However, when she cautiously opened the door, she found no one, just a box with four Crumbl cookies and a bright pink poster that read “I’d Crumbl if you said no.”

Meanwhile 1.8 miles away, Highland High School sophomore Karsyn West was wondering why nobody had asked her to homecoming.

“I was feeling sad because all of my friends were getting asked, my best friend got asked to homecoming,” she said. “I didn’t think I would get asked.”

Damian Jackson, the young man responsible for the well intentioned but misdelivered invite, said he expected West to respond to his sweet gesture within minutes of leaving it. He was disappointed when that didn’t happen.

“I wanted to have a really good sign so hopefully she would say yes,” he said.

After figuring out that his phone’s GPS system had taken him to the wrong address, Jackson asked West to the dance the next day at school. Little did they know, the incident had spurred a quest in the neighborhood to bring the two would-be lovebirds together.

“I knew when I brought them in that it was from somebody who was asking someone to the dance,” Lemmon said of the cookie delivery. “I felt bad because the poor girl wouldn’t get the poster and would think she wasn’t being asked.” 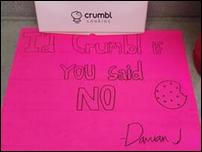 Act fast, Damian J. The cookies are crumbling on your dance invitation. Sadly, you delivered it to the wrong house Thursday night.

She turned to her friend Carole Van Hook, who posted a picture of the cookies and poster on the neighborhood app NextDoor in hopes of tracking down the mysterious “Damian J,” who had failed to disclose his full name on the poster.

The post quickly went viral, gaining more than 100 comments over the weekend.

“I think it was just something that gave a lot of them some happiness, and it was like ‘This is a mystery. Where is Damian? Who is he?’” said Lemmon.

Neighbors who collaborated in the search went as far as calling Skyline and Olympus High schools, but didn’t think to call Highland where the two sophomores were attending class. One volunteer even went to the Crumbl cookies store to see if she could track down some clues.

It wasn’t until the story hit the news that a concerned Lemmon and Van Hook managed to contact the teens and make sure that no hearts had been broken.

The trio group met for the first time at Lemmon’s home in Holladay and were able to piece together the trail of crumbs.

“You shouldn’t have run so fast,” Lemmon said to Jackson, who quipped that “gremlins” must have ate some of the cookies.

Lemmon and Van Hook confessed they’d enjoyed the sweet treats after searching high and low for their rightful owner.

It turns out that in the end, there were plenty of cookies to go around. Before the group gathered, Crumbl executives made sure to deliver a box to Lemmon, and Crumbl cookie spokeswoman Britnee Nuehring said the company is working with the teens on ways to sponsor the date.

Though plans have yet to be finalized, she said the company may pay for corsages and possibly drive the teenagers and their friends to the dance in a pink Crumbl van.

“We want to make your dance even sweeter,” Nuehring said.