Burningham, a founder and chairman of Peak Capital Partners, stood on the steps of the state Capitol to announce his first run for political office, joining what is expected to be a crowded race in 2020 to succeed Gov. Gary Herbert, who is not seeking reelection after more than a decade in office.

Again and again Tuesday, Burningham cited his private sector experience as giving him the advantage in the race, including starting his first tech company as a BYU student that he sold at age 25 to a NASDAQ-listed firm, then building a real estate portfolio valued at $2 billion in 2017 before getting into venture capital.

With his partners, Burningham said Peak Capital has invested more than $40 million in startup companies along the Wasatch Front that have created over 4,000 jobs in the state. His firsthand view of the economy, he said, has made ending corporate giveaways and business over-regulation his campaign priorities.

“I don’t think it makes sense to incentivize growth along the Wasatch Front via tax giveaways,” he said. “That is not a good game plan for today. That might have been smart a decade or two ago, but today, I don’t think that makes sense.”

He said occupational licensing is an example of where the state over-regulates business and “disproportionately hurts the poor and those that are trying to come up.”

And rural Utah, Burningham said, “needs a fighter in their corner” to boost economic development.

Also a priority is what he termed modernizing education. 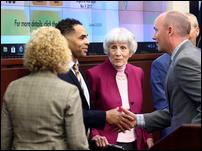 Republican Lt. Gov. Spencer Cox has raised more than $250,000 since announcing his candidacy for governor a month ago, according to his campaign. (Photo: Scott G Winterton, KSL.)

He cited private technology training “boot camps” as an example of the private sector filling a need the public school system hasn’t and said he wants to “bring more boot-camp style education into our high schools, both for technology but also skilled construction labor.”

While he said he wanted to spend more money on schools because of a shortage of workers along the Wasatch Front, Burningham provided little detail, promising to roll out “solutions that we have not tapped into to fund education” in the coming months.

The overall state budget, he said, could be trimmed down. Lawmakers are currently reviewing the state’s tax structure to remedy what is viewed as an imbalance between growth in income taxes, which fund education, and sales taxes that pay for much of the rest of the budget.

Burningham said he opposed the solution rejected during the 2019 Legislature, imposing new sales taxes on services, an attempt to broaden a tax base that’s declining as consumer spending shifts from goods to services. Taxing services is not good for business, he said, again pledging to offer alternatives later.

He said he would seek a “top to bottom audit” of state spending to see where cuts could be made before calling for new revenues.

Over the past eight months, Burningham said he’s traveled the state to meet with voters. He said he is optimistic about the future.

“Utah is uniquely positioned to seize the moment to shape its own destiny and step onto the world stage. That’s why the campaign for Utah’s next governor isn’t about yesterday’s ideas or today’s status quo,” he said. “It’s about tomorrow’s opportunity.”