SALT LAKE CITY — Two men were charged Thursday with gunning down a Salt Lake man, killing him, after already threatening to rape and kill a woman, according to prosecutors.

On Aug. 14, a woman received a message request on Facebook from someone named “Jokie Dinero,” who investigators later determined to be Esquivel.

“In the course of the conversation (he) threatened to rape, drown and kill her infant son and to kill her,” the charges state.

The woman told another man what was happening, and the man got into an argument on Facebook with “Jokie Dinero,” according to charging documents. They agreed to meet at the Sunnyvale Apartments, 3990 S. 700 West, to fight.

The man got his brother-in-law, Taylor Kauvaka, 31, to go with him. About 1:45 a.m. as the two sides spotted each other outside the apartment complex, Kauvaka and the man began to walk toward May and Esquivel. 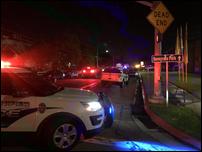 One man was shot and killed and two men were arrested early Wednesday following a dispute that started with an argument on social media, police say.

“As they approached, (the man) heard a shotgun rack and saw that May was holding a shotgun. (The man) stopped walking, but Taylor continued towards Esquivel and May,” the charges state.

Police further stated in a Salt Lake County Jail report that “Taylor Kauvaka intervened after (May) pulled a shotgun from a cardboard box. Taylor placed himself in front of said witnesses and slapped the gun, which was being pointed in his direction. (May) fired a single shot resulting in Taylor’s death.”

After the shooting, May approached a police officer and told him that he had shot someone before leading the officer to a shotgun and shotgun shells, the charges state.

Esquivel’s family took him to the Unified Police Department to be questioned by detectives. While they were in an interview room, Esquivel was overheard asking his mother to delete his Facebook account, the charges state.