PARK CITY — A Park City transit driver was charged with a DUI after the bus he was driving ended up in a ditch, authorities say.

Jason Benjamin Parker, 43, was charged Sunday in 3rd District Court with a DUI, a class B misdemeanor, and failure to operate within a single lane, an infraction.

About 8 a.m. Saturday, the bus went off the side of Homestead Road between Rasmussen Road and I-80, according to an emailed statement from Diane Foster, city manager for Park City Municipal Corporation. Parker and one passenger were the only two people on board at the time, authorities said.

No injuries were reported, but the road was closed for about three hours as crews worked to get the bus out of the ditch, authorities said.

Parker told a Summit County sheriff’s deputy that he fell asleep while driving, causing the bus to veer off the road and into the ditch, according to the arrest report. The responding deputy did not smell alcohol on Parker at the time, the report states.

Parker told the responding deputy he had consumed alcohol the night before, according to the report. The deputy smelled alcohol coming from Parker, and drew a sample of Parker's blood, the report states; the results of that blood draw are still pending. 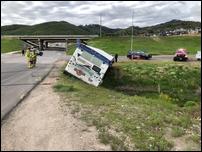 A Park City transit bus veered off the road Saturday morning, temporarily closing Homestead Road while workers tried to pull it from a ditch.

Parker has been “relieved of all duties,” according to Foster. Park City Transit has a zero-tolerance drug and alcohol policy for its drivers, she added.

Parker began part-time work for Park City transit in December 2016, and came back as a seasonal employee in 2018. He had no prior violations or restrictions during that time, Foster said.