SALT LAKE CITY — A Unified police officer accused of running over a woman lying down in a parking lot while responding to a call has a history of poor driving, according to police records.

About 10:50 p.m. on March 5, a Unified police officer was dispatched to conduct a welfare check on a woman in the parking lot of a strip mall at 3304 S. 2300 East. The officer drove into the lot but did not see the woman, who police say was wearing dark clothing and lying in the middle of the road.

Cindreia Simone Europe, 25, of Georgia, died. Europe had been living out of her car until it was recently towed. She had been spotted sleeping in various parking lots in that area in the week leading up to the accident. It was not known whether she died as a result of being hit by the car or if she was already deceased prior to police arriving.

Salt Lake police are investigating the incident. As of Friday, officer Megan Franklin remained on administrative leave pending the outcome of the investigation.

Franklin is new to the Unified Police Department.

But according to documents obtained by the Deseret News through a public records request, she had resigned from the West Valley City Police Department after she was placed on a week's leave without pay for consistent traffic violations.

"Your driving history reflects a poor pattern of attention to proper driving tactics and this has contributed to an unacceptable number of preventable accidents on your part," former West Valley Police Chief Lee Russo wrote in a letter to the officer.

The letter further noted that the officer was involved in "an excessive number of preventable accidents" and that several disciplinary actions "appear to have little corrective effect in changing your driving behavior." 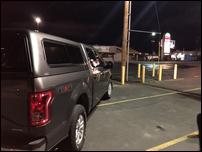 Police have identified a Georgia woman who was run over by an officer while lying in the middle of a parking lot late Tuesday night.

Franklin, who had previously been suspended for 30 hours, was issued a 40-hour suspension without pay.

In October 2017, the officer submitted her letter of resignation to the department.

"It is not my first choice to resign, but I do it for the good of the department and myself," she wrote.

According to disciplinary orders issued by West Valley City, the officer, while working for the department:

The incident that led to a 40-hour suspension occurred on May 6, 2017, when she drove over large rocks, causing damage to her patrol car.

That was the "seventh preventable/at-fault traffic accident you have had in your eight years of service," according to the chief's letter.

Unified police had no comment on Friday, other than to say they are waiting for the outcome of the investigation by Salt Lake police.