SALT LAKE CITY — A Lehi man who uses cannabis for a health condition found himself on the wrong side of the law six days after Utah lawmakers legalized medical marijuana last December.

But lawyers for Jason Harris were able to work with prosecutors to dismiss the misdemeanor criminal charges against him in what might be the first case of a Utahn facing prosecution since the new law took effect.

Proponents of medical marijuana say the case shows the confusion among residents and law enforcement over the law as well as some of its ambiguities. They also say it's an example of how prosecutors should deal with legitimate medical cannabis patients.

"With new law comes new understanding," said Desiree Hennessy, director of the Utah Patients Coalition, adding the group is working to educate people on the law.

A Lehi police officer stopped Harris, a married 44-year-old father of four, for speeding near his house during morning rush hour on Dec. 11. The officer told Harris he smelled marijuana and Harris retrieved his medicine bag containing his supply for the month, including the raw flower. The law requires the raw flower to be in a blister pack, which Harris' was not.

"I was in handcuffs and I was thinking everybody saw," he said, adding several more police cars arrived on the scene. "I knew this was a risk before Prop. 2 passed but I did not believe this day it was a risk any longer."

Harris uses medical marijuana for a cystic tumor in his brain and colitis. He suffered migraine headaches, seizures and chronic pain before turning to cannabis. He said he became extremely sick after police confiscated his medication. The city also forced him to resign as coach of his son's recreational basketball team.

"That was one of the hardest moments and it was more difficult than being sick," he said. 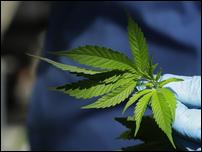 How will legal medical marijuana in Utah affect the workplace?

Now that the Utah Legislature has approved a compromise bill legalizing and regulating the use of medical marijuana in the state, local employers are pondering how the new law will affect their work environments.

Harris turned to longtime friend DJ Shcanz, of the Utah Patients Coalition, one of the groups behind the initiative to legalize medical cannabis. The coalition paid his legal fees.

Intermountain Legal attorneys Steve Burton and Justin Pratt showed Lehi prosecutors that Harris qualifies for medical cannabis and has a doctor who recommended he use it.

Although Harris wasn't in 100 percent compliance with the law, he is the type of person it is intended to protect, Burton said, adding there was no way Harris could learn all the law's requirements in the six days after it passed.

"Fortunately, we were able to have a prosecutor who looked at Jason's case and determined that Jason was in fact a legitimate medical cannabis user," Burton said. "We were thankful that they were willing to show compassion and choose not to prosecute this case in the interests of justice, even though every requirement was not met."

Lehi dismissed the charges Tuesday, according to court documents.

Burton said he hopes other prosecutors will recognize that juries would not be likely to convict legitimate medical marijuana patients.

Connor Boyack, president of Libertas Institute, said he's aware of at least four other cases of patients facing criminal charges. He said he's working with lawmakers to make changes to the law during the current legislative session as well as in the future.

"It's very clear that if juries are going to be unwilling to throw the book at someone because their medicine is not in an arbitrary container that was part of this agreement, then why do we have that requirement in the first place?" he said. "Those are going to be the lessons learned that trickle up into the policy that we're going to be working on the years to come."