SALT LAKE CITY — A resolution encouraging development of advanced nuclear reactor technology for Utah's future energy needs is on the docket for possible passage this session, but critics say it would be financial folly for future ratepayers.

HEAL Utah, a local watchdog organization and advocate for clean energy, held a press conference Tuesday at the state Capitol to detail why small modular reactor technology is not financially viable.

The media event was held the same day as the Millennial Nuclear Caucus was hosted at the Capitol by the U.S. Department of Energy and the Utah Associated Municipal Power Systems, both of which are pursuing a small modular reactor project at the Idaho National Laboratory.

NuScale's planned 720-megawatt, 12-module modular nuclear power plant is in the design certification phase before the U.S. Nuclear Regulatory Commission and is scheduled to go online in 2026.

The Utah-based municipal energy coalition, with members in six states, is looking to shore up a carbon-free energy source for its baseload of power in light of declining domestic coal consumption and uncertain regulatory requirements.

The modular design by NuScale is a closed-loop, self-cooling system that proponents say is far cheaper than its traditional counterparts and incapable of a meltdown.

But Peter Bradford, a professor at Vermont Law School and a former member of the U.S. Nuclear Regulatory Commission, said he doesn't think the NuScale technology is capable of delivering competitive per-kilowatt-hour costs.

Even at the Utah coalition's contracted cap of 6.5 cents per kilowatt-hour, the energy market will not favor prices that high, he said.

Bradford, who worked for years in regulated utility markets, said lowballing costs has been characteristic of the nuclear energy industry nearly since its inception.

He added he is not opposed to nuclear energy because of its waste or its safety record, but rather the huge cost overruns accompanying the most recent projects in South Carolina and Georgia. 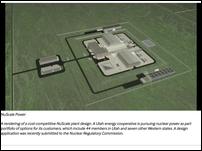 A small modular nuclear power plant design for a facility in southeast Idaho is winding its way through the federal regulatory framework, a procession a key Trump administration official described Tuesday as historic.

States or utilities that pursue an "all-of-the-above" strategy do so unwisely, he added, because it is too pricey.

"We can't afford to do everything," he said, likening the pursuit to fighting world hunger with caviar.

But proponents of the small modular reactor technology believe it is game changing for the energy sector to the extent there is a global race playing out to see which country successfully deploys it first.

The U.S. Energy Department has pumped more than $220 million into the Idaho project and has been encouraging throughout the licensing process, the coalition's general manager, Doug Hunter, said.

Just recently, the federal agency inked an agreement to use two of the possible 12 modular reactors at the Idaho laboratory — one for energy needs and the other for further development of the science.

Did you know: A single @NuScale_Power Module produces 60 MW of clean, affordable and reliable energy, enough to power 45,000 American homes with carbon-free electricity. It’s just one of the reasons why #advancednuclear & #SMRs should be part of the plan to #ActOnClimate.

Hunter and others believe NuScale can deliver attractive and stable energy prices for ratepayers for decades to come — stability that is welcome given the volatility of carbon-based energy streams.

Mark Nichol, director of new reactor deployment with the Nuclear Energy Institute, said the modular nuclear technology is price competitive through public private partnerships — like incentives also offered to solar and wind — that will allow it to play in the marketplace against natural gas.

"This is nothing new and nothing special for nuclear," he said. "There are also intangible benefits that make it difficult to quantify."

Hunter said the association has investments in renewables, but wants to add another source of energy to its portfolio.

The Millennial Nuclear Caucus was to host a panel discussion later Tuesday with Hunter, Nichol and Suzanne Jaworowski, a senior adviser with the U.S. Department of Energy.