BRIGHAM CITY — A charming football player won them over and persuaded them to spend time alone with him.

Then he raped or sexually assaulted them, mostly at his apartment and after watching a movie.

A jury on Friday decided that the six women who didn't know each other were telling the truth when they gave similar accounts of how Torrey Green, once an NFL hopeful, ignored their attempts to resist him the first time they were alone with him.

After 16 1/2 hours of deliberation over two days, jurors found Green, 25, guilty of raping five women and sexually assaulting a sixth. Green hung his head as tears rolled down his face when a judge read the verdicts aloud in Brigham City's 1st District Court Friday evening, alternately turning to face his parents and holding his head in his hands.

None of the women were present in court when a judge read the verdicts, but they were "thrilled" when they got word that the jury sustained their allegations of sexual assault, said Spencer Walsh, deputy Cache County attorney.

"We're very happy that they believed all six of these survivors," Walsh said. He praised the courage of the victims who faced Green in court repeatedly over nearly two years and took the stand to describe in detail how he assaulted them when they were in their late teens or 20's.

The jury of five men and three women acquitted Green of some charges, including object rape and aggravated kidnapping. The decision followed days of testimony from the women and from Green, who adamantly denied each of the charges during the two-week trial, at times flashing a smile as he reflected on his own charm. He testified that four of the sexual encounters between 2013 and 2015 were consensual and two never happened.

Throughout the trial, prosecutors focused in on the similarities of the cases. They at times pointed to smiling portraits of each woman on an easel, noting the stress and trauma the women have endured in the wake of the assaults.

Green's attorney, Skye Lazaro, argued that her client's accusers had sought attention after he signed a contract to play professional football. She focused on delays in the women's reporting that sometimes spanned years, saying prosecutors bowed to pressure from news organizations that named her client in connection with assaults.

Outside the courtroom, Walsh said the outcome illustrates that survivors of sexual assault often wait months or years to report the crimes to police, and those cases can still be prosecuted so offenders are held to account. 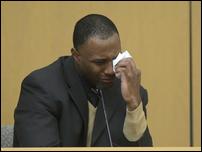 The sex was consensual or it didn't happen. That was the testimony from former Utah State University linebacker Torrey Green, who took the stand Tuesday in his own defense.

"I hope this is a learning experience for everyone involved," he said, including victims and those around them, in addition to police and prosecutors.

Sobs could be heard outside the courtroom on Friday a short time after the verdicts were read, and Green's family left without commenting. Lazaro also left the courthouse through a back exit without speaking to reporters.

Lazaro argued earlier in the trial that prosecutors cherry-picked evidence to build the cases and the women came forward after he signed a contract with an NFL team, arguing Green "should have a Super Bowl ring." Her client acknowledged on the stand that he is not proud that he had sex with multiple women during college, but insisted he did not rape anyone.

Prosecutors on Thursday urged jurors not to find Green guilty of any lesser offenses, just the 11 felony charges he faced. They said the women have nothing to gain from the grueling court proceedings and pointed to evidence that several disclosed assaults before any news reports.

Green, who is from Rubidoux, California, was signed as a rookie linebacker for the Atlanta Falcons following his successful time playing for USU. He was cut from the team in 2016 after initial rape allegations surfaced.

A judge combined the six cases into one trial last year, in large part due to their similarities. Another rape case remains separate, but no trial date has been set.

Walsh said prosecutors plan to seek a combined prison sentence of at least 25 years and up to life in prison, without credit for the more than two years Green has already spent in Cache County Jail while awaiting the trial.

Sentencing is scheduled for March 27.