SALT LAKE CITY — The mining industry in Utah is in no pit — it has actually grown, according to a new report.

The industry’s production value went up 7 percent from 2016 to 2017, to about $3.3 billion, according to the Utah Geological Survey’s Utah Mining 2017 report.

The production value of the industry peaked in 2011 at about $5.3 billion, according to the report.

The total value of Utah’s extractive resource production industry, which includes mining and oil and gas production, was about $5.8 billion in 2017, the report states. The mining industry accounted for just over half of that value.

There are still many active mining production facilities all over Utah, from the Intrepid Wendover mine near the Utah-Nevada border to the Lisbon Valley copper mine in San Juan County.

Between processing of metals, precious metals, industrial minerals and coal, the mining industry employed 4,153 people in 2017, with an average salary just above $70,000 per year, according to the report.

Copper is the top metal mined in the state, but magnesium and beryllium are also produced, said Rupke, who co-authored the UGS report. The only precious metals mined in Utah are gold and silver.

Rio Tinto Kennecott remains the “main player” for copper production in Utah, but the company also produces gold and silver, Rupke said. Copper is responsible for 70 percent of the base metals production in the state, according to the mining report.

Kennecott is still recovering from a 2013 landslide that damaged the Bingham Canyon Mine, according to Rupke. Complete recovery is expected by late 2018, according to the report.

As the company continues building back up after that incident, metals production will continue growing, Rupke said.

Bingham Canyon is the second-largest copper producing mine in the United States, and the Bingham mining district is the most productive in the country, according to the report. The mine has been in production since 1903.

Industrial minerals include sand and gravel, salt, potash, gypsum, clay for brick production and other items, Rupke said. That’s a more stable sector of the mining industry, Rupke said, so he expects growth to continue there. 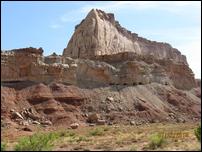 State begins work to shore up Utah's legacy of mining

The Utah Division of Oil, Gas and Mining is launching a project to close about 200 abandoned mines in the Gold Hill area of Tooele County, once home to a thriving boom town where miners looked for gold, silver, tungsten and other precious metals.

For coal, there’s been a general decline in production in the last few years, as more and more power plants are switching to natural gas as a fuel source, Rupke said. However, coal exports were up in 2017, he added.

The UGS report focuses on what’s being produced now, but also includes information about exploration in the industry.

“That’s shaping up to be a significant gold project,” he said.

The company purchased the property in 2014, according to the website.

Mining companies across the globe are becoming more mindful of the potential environmental impacts of the industry and are shifting to become more sustainable, Rupke said.