SALT LAKE CITY — A new fire that sparked near Minersville in Iron County on Friday evening grew to more than 1,300 acres by Saturday morning.

Meanwhile, firefighters are continuing to gain containment of the Dollar Ridge Fire in Duchesne County, which is the largest fire of this season thus far.

Currently, nine active wildfires are burning across the state, according to Utah wildfire officials.

Stay tuned to KSL.com for live updates on fire activity throughout the day. 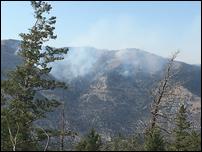 Possible thunderstorms are forecasted Friday and over the weekend for many of the areas where fires are burning in the state, which poses potential help and threats for those fighting the wildfires.

This story will be updated.