PROVO — A BYU professor's research has helped discover the existence of a series of "methane ice" dunes on the dwarf planet Pluto.

Jani Radebaugh, professor of planetary studies and geology at BYU, has co-authored an article published in Science, a scientific journal, laying out the discovery she made along with an international team of scientists.

"It's always really exciting to be part of this endeavor of space exploration," Radebaugh said.

Thanks to NASA's 2015 New Horizons probe mission, higher-resolution images of the distant planet were made available to the scientific community. As she looked at some of these images, Radebaugh had a thought.

"I was looking at the top corner of the glacier, on the valley floor I could see long, straight, regular ridges," Radebaugh said in a video posted by the university on YouTube, "and as I looked really closely at those I thought, 'Those are dunes.'"

The research itself started with a post Radebaugh made on Facebook in the summer of 2016. Her realization was shared by a colleague, across the world in the United Kingdom at the time, who would later become the study's lead author.

Matt Telfer commented back and forth with Radebaugh on social media about the realization. They eventually turned to emailing each other as the study developed. From there, an array of other researchers joined the project, from geographers to physicists and planetary scientists.

Their research says that dunes, on the boundary of Pluto's Sputnik Planitia, were found pushed up against a mountain range spanning an area less than 50 miles across.

Radebaugh and her colleagues believe "sands" of methane ice fell on mountains of water ice, forming the dunes she was seeing. The team's research estimates the dunes were likely formed in the last 500,000 years.

They believe the process of sublimation, which converts solid nitrogen into gas, resulted in sand-sized grains of methane falling to the planet surface.

"We knew that every solar system body with an atmosphere and a solid rocky surface has dunes on it, but we didn't know what we'd find on Pluto," Telfer, the lead author of the study and lecturer in physical geography at the University of Plymouth, said in BYU's press release.

The main significance of these findings, according to the authors, is the role of wind and sand particles in the creation of these dunes. Wind is hard-pressed to find on a planet with such little atmosphere and these moderate winds — between 18 and 25 mph — brought the methane "snow" against the established mountain range.

"Just thinking about mountains of water ice, snow of methane and glacier of nitrogen just blows my mind," Radebaugh said.

Overall, the team's research offers new considerations of the dwarf planet's atmosphere, which they believe has more in common with our own than we might think.

"Despite being 30 times farther away from the sun as the Earth," Radebaugh said in BYU's press release, "it turns out Pluto still has Earth-like characteristics."

Radebaugh connected the two planets in a way she has done for eight years: By taking her BYU students to the Mesquite Flat Sand Dunes in Death Valley, California.

"Looking at these analogs really helps us understand places on other planets because we can walk around on them, we can pick up the sand, we can better understand what way the wind is blowing," Radebaugh said in the video, "and this tells us a lot more than we can find on other planets where we have really limited data." 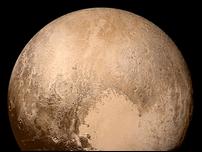 The mission into Pluto's dunes is likely not over for Radebaugh, however, as the researchers plan to use computer simulations to learn more of the dunes' history and the wider questions of wind's role on Pluto's geology.

This isn't Radebaugh's first exploration of the wide reaches of space, and likely not the last, but she still has an unshakable awe.

"To be in the field, to be a planetary scientist, and looking at images that have come back from spacecrafts, images of the surface that no one's ever seen before and we're the first ones to see it, we're the first people to live during a time when we get close up images of Pluto, is really special," Radebaugh said.