Drought on tap to intensify over US Southwest

ALBUQUERQUE, N.M. (AP) — Rivers are drying up, popular mountain recreation spots are closing and water restrictions are in full swing as a persistent drought intensifies its grip on pockets of the American Southwest.

Climatologists and other experts are scheduled Wednesday to provide an update on the situation in the Four Corners region — where Arizona, New Mexico, Colorado and Utah meet.

The area is dealing with exceptional drought — the worst category. That has left farmers, ranchers and water planners bracing for a much different situation than just a year ago when only a fraction of the region was experiencing low levels of dryness.

With the region's water resources strained, a top federal official has resumed pressure on states in the Southwest to wrap up long-delayed emergency plans for potential shortages on the Colorado River, which serves 40 million people in the U.S. and Mexico.

"We face an overwhelming risk on the system, and the time for action is now," Bureau of Reclamation Commissioner Brenda Burman said Tuesday. She spoke before the Imperial Irrigation District in Southern California, one of the biggest single users of the Colorado River.

The drought has hit the Colorado River hard. Forecasters say the river will carry only about 43 percent of its average amount of water this year into Lake Powell, one of two big reservoirs on the system. 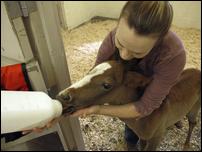 Off a northern Arizona highway surrounded by pastel-colored desert is one of the starkest examples of drought's grip on the American Southwest: Dozens of dead horses surrounded by cracked earth, swirling dust and a ribbon of water that couldn't quench their thirst.

There's a 52 percent chance that Mexico and the U.S. states of Arizona and Nevada will take a mandatory cut in their share of water in 2020 under the agreements governing the river, forecasters have said.

In New Mexico, stretches of the Rio Grande — another of North America's longest rivers — have already gone dry as federal biologists have been forced to scoop up as many endangered Rio Grande silvery minnows as possible so they can be moved upstream.

The river this summer is expected to dry as far north as Albuquerque, New Mexico's most populous city. The area saw its first major dose of rain Tuesday, bringing an end to a 54-day dry spell. It wasn't enough to make up for months without meaningful precipitation.