SALT LAKE CITY — Prompted by declining revenues, the publisher of the Salt Lake Tribune Tuesday announced that major changes are on the horizon for the newspaper, the details of which will be made public by next week.

During a meeting on Tuesday, owner and publisher Paul Huntsman told newsroom staff about the "impending changes and financial difficulties" facing the paper and said "specifics on layoffs, reducing print pages and other content changes would be forthcoming within a week," according to the Tribune's website.

He told employees that in the two years since he acquired the paper from New York-based Digital First Media, the paper's advertising revenues have fallen 40 percent as daily and weekend print circulation continues to decline, the newspaper reported. Huntsman said he personally covered losses for eight months, this after investing more than $1 million to upgrade the paper's online and digital production capabilities.

He also noted that critical determinations still remain with the impending 2020 expiration of the current joint operating agreement with the Deseret News.

The Tribune has seen a 40 percent decline in both print ads and circulation over the past 24 months. ...Still, we've seen solid growth in digital and expect that to continue, but we need a newsroom that's more in line with our new reality.

The paper employs 90 newsroom staff, the Tribune reported, but the number of potential layoffs was not announced. Editor Jennifer Napier-Pearce will lead a group of newsroom managers in the process of "right-sizing" — determining what positions will be eliminated and how to move forward with the print circulation.

"The Tribune has seen a 40 percent decline in both print ads and circulation over the past 24 months," she said in an email to KSL. "Those industry-wide factors remain outside of our control. Still, we've seen solid growth in digital and expect that to continue, but we need a newsroom that's more in line with our new reality."

The Tribune's online story noted that Huntsman anticipates the paper’s business model to "evolve further after 2020, possibly as a not-for-profit operation," but added that he “would love to keep putting out a print edition."

A restructuring plan is expected from managers within the next week, Napier-Pearce said. Employees that will be leaving would receive any owed vacation pay as well as the option of severance, she said.

In one proposed cost-saving measure, the Tribune story indicated the paper would examine moving from its current location at The Gateway to another site. 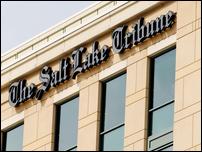 Utah businessman Paul Huntsman completed his purchase of the Salt Lake Tribune on Tuesday, returning one of the state's two major newspapers to local ownership.

Huntsman said he is optimistic despite the current financial situation. He attributed the optimism to perceived progress in continuing negotiations regarding the Deseret News-Tribune joint operating agreement governing print, advertising and circulation. The paper's potential long-term viability has been enhanced by recent discussions, he said.

“They really want us to survive,” Huntsman said of those involved in the talks, according to the Tribune story. “I’m very appreciative of their recognition.”

In response to Tuesday's announcement from its long-time business partner, the president and publisher of the Deseret News issued a statement:

“We understand the economic pressures facing the Tribune — as they are the same at the Deseret News and across the entire media landscape. We went through significant layoffs previously and continue to seek ways to be a trusted voice in Utah and across the country in what is a dynamic and challenging environment,” said Jeff Simpson.

“I’ve been talking with Paul about the future of our shared business interests through the joint operating arrangement at the Newspaper Agency Company and we continue to seek solutions that maintain diverse voices in our community," he said.