SALT LAKE CITY — Salt Lake City's efforts to land another Olympics may be slowed down but won't be stopped by a statement from a U.S. Olympic Committee official ruling out a bid for the 2026 Winter Games, supporters said Friday.

"We don’t know what it means yet," said Fraser Bullock, co-chairman of the state's Olympic Exploratory Committee. "Even if we’re not in the 2026 process, we’ll be in the 2030 process."

Utah Sports Commission President and CEO Jeff Robbins, also a co-chairman of the exploratory committee, said the plan continues to be to spread the word that the state is prepared to repeat the success of the 2002 Winter Games in Salt Lake City.

"We’re going to keep on our toes and remain fluid and adapt as we need to," Robbins said. "Our goal is to continue really evangelizing and just showing how ready, willing and able we are. … That strategy hasn’t changed."

Earlier Friday, the Associated Press reported that USOC Chairman Larry Probst ruled out the possibility of bringing the Olympics to Salt Lake City, Denver or Reno in 2026, two years before the Summer Games will be held in Los Angeles.

"It would make things extremely complicated from a financial standpoint with Los Angeles," Probst told reporters in Pyeongchang, South Korea, where the 2018 Winter Games are underway.

Bullock, who heads to Pyeongchang next week to meet with Olympic officials, said he hopes to find "middle ground." But if not, he said it would mean only up to a two-year gap in bidding, not an end to the effort to bring the Games back. 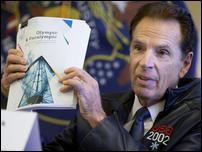 'We did it once; we can certainly do it twice': Another Olympic bid for Salt Lake recommended

"I think the negative is we have a lot of momentum now. We just want to keep moving forward. If we only participate in a 2030 process, it doesn’t change the end date. It slows down a bit our activity," Bullock said.

Robbins will also be in Pyeongchang. He said he plans to distribute copies of the exploratory committee's lengthy report detailing plans for another Olympics, including a proposed $1.35 billion budget that under what was spent in 2002.

Earlier this week, the exploratory committee that includes Gov. Gary Herbert, Salt Lake City Mayor Jackie Biskupski and legislative leaders, released the report and voted to recommend bidding for another Olympics, most likely 2030.

But Bullock said Salt Lake also wanted to be in position to host in 2026 should other cities that already have expressed interest — including Sapporo, Japan; Stockholm, Sweden; Sion, Switzerland; and Calgary, Canada — drop out.

Two other American cities are looking at bidding for a Winter Games, Denver and the Reno-Tahoe area.

A spokeswoman for the Denver bid, Ramonna Robinson, said in a statement work will continue to determine if a bid should be pursued "regardless of whether that is in 2026, 2030 or 2034.

Bullock said Salt Lake City also wants to bid now because the International Olympic Committee may choose to award the 2026 and 2030 Winter Games at the same time, just as happened last year with the 2024 and 2028 Summer Games.

That decision put the USOC in a difficult position when it comes to 2026, because Los Angeles, as host of the 2028 Summer Games, has locked up domestic sponsorships through that time.

Bullock said the USOC's statements on 2026 suggest there may not be another dual award. The IOC has yet to say what will happen in September 2019, when the site of the 2026 Winter Games is expected to be announced.

"I believe that if the USOC decides not to participate in the 2026 process, it would do so with the assurance that they could participate in 2030," he said. "They’ve made it very, very clear they’re seriously interested in 2030."

The exploratory committee's other co-chairman, Senate President Wayne Niederhauser, R-Sandy, said there was initially some difference of opinion about how to proceed if the USOC didn't back a 2026 bid but they're on the same page now.

Niederhauser said he, Bullock and Robbins will function as a "lookout tower" for ways to promote another bid.

"Any kind of opportunity that arises, we are ready to pounce on it," the Senate president said. Utah will stay "right in the mix," he said. "If you don’t, you may lose some opportunity and we don’t want to be in that position."