Suspect in manhunt said he'd die before going back to jail, police say

SALT LAKE CITY — Justin Llewelyn, the man who sparked a five-day manhunt after allegedly shooting a homeowner and firing at two police officers, told others he would rather be killed by officers than go to jail, police say.

"(Llewelyn) told numerous people that he was not going to go to jail and he would do 'suicide by cop,'" a Salt Lake County Jail report states.

Despite those menacing threats, Llewelyn was taken into custody Wednesday without any gunfire following a chase through Utah County.

A deputy sustained minor injuries when he T-boned the pickup truck Llewelyn was driving.

"My entire thought process was (to) get this guy stopped any way I can," Utah County sheriff's deputy Justin Mortensen said Thursday, adding he had been told the suspect was likely armed.

Llewelyn, 33, was booked into the Salt Lake County Jail for investigation of three counts of attempted murder, aggravated robbery, aggravated burglary, possession of a firearm by a restricted person, failing to stop for police and theft by receiving stolen property.

On Saturday morning, a Unified police officer attempted to stop and talk to Llewelyn about his possible involvement in car burglaries in the area, the report states. Llewelyn ran off. And while the officer was running after him, "the officer heard what he believed were gunshots" coming from Llewelyn.

A short time later, a second officer confronted Llewelyn who "began firing a handgun in the officer's direction," the report states.

Llewelyn again ran off, this time into the home of Steve Smith, police say. Smith said he found Llewelyn in his garage trying to steal his car. That's when Smith said Llewelyn fired multiple shots at him, striking the homeowner in the chest and side.

Investigators launched a large manhunt for Llewelyn that lasted for five days.

Between 3:30 p.m. and 3:45 p.m. Wednesday, the Violent Fugitive Apprehension Strike Force — a team consisting of U.S. marshals, Unified police and other local agencies — spotted Llewelyn sitting in a stolen pickup truck at Bicentennial Park, 1600 E. 1440 South, in Provo, said Unified Police Lt. Brian Lohrke. He called it good investigative work and not just coincidence that the strike force spotted Llewelyn in Utah County, but he declined to go into detail.

"He's parked and stationary and the detectives are putting together a plan to take him into custody right there because he was still parked," Lohrke said.

The strike force called the Utah County Sheriff's Office to have deputies get in position should the man flee, he said. While that was happening, Llewelyn started to drive away.

When he got onto State Street, the strike force attempted to pull him over, Lohrke said. That's when Llewelyn fled.

The ensuing 20-minute, 10-mile chase went south on U.S. 89 through Springville into Spanish Fork. In Spanish Fork, Llewelyn turned his truck around and started heading north on Main Street toward I-15, according to Lohrke. At that point, Mortensen sought to make a PIT manuever on the pickup truck, Lohrke said, intentionally bumping the fleeing vehicle in an attempt to get it to spin out. 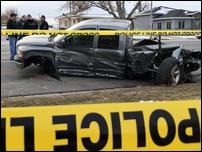 Police have arrested a man suspected of shooting another man and firing at police officers over the weekend near the Herriman-Riverton border.

In this case, the vehicles crashed, causing heavy damage to both the police car and the truck. As soon as the truck came to a stop, a large number of officers with guns drawn swarmed on the vehicle. No other motorists were injured.

"He pretty much gave up at that point. I think he was a little rattled. But detectives were on him pretty quick," Lohrke said.

Llewelyn was treated for minor injuries at a local hospital before being booked into jail.

Mortensen, who has worked in Utah County law enforcement for 20 years, said he "just happened to be in the right spot" Wednesday afternoon.

Mortensen had a sore, bandaged wrist and cuts on his arms. He said his face felt sunburned from his air bag's deployment, but he suffered no broken bones and would do the same maneuver again today, if needed.

Llewelyn surrendered, Lohrke said, despite telling others that he was willing to die at the hands of police, and despite officers spotting a handgun inside the truck. Police did not identify Thursday who the "numerous people" are that Llewelyn allegedly told he wasn't going back to jail.

Earlier this week, Tasha Llewelyn, 50, and Misty Llewelyn, 24, both of Riverton, were arrested for investigation of obstruction of justice. Investigators say both women "knew about the suspect's involvement in this crime and took steps to be untruthful" with police Saturday, according to police affidavits. Police have not said if either woman is related, though they did indicate that Justin Llewelyn has relatives who live in the area.