SALT LAKE CITY — Utah's Intermountain Healthcare is at the helm of a collaboration with hospital systems across the country that will manufacture and distribute a selection of generic drugs to fight rising costs.

Project Rx, as it is called in its nascent stage, aims to help patients and hospitals facing drug shortages and increasing costs of certain medications and make them more available and more affordable, "bringing healthy competition to the market for generic drugs," said Intermountain CEO Dr. Marc Harrison.

It took a while for hospital executives to figure it out, but upon learning that a handful of "rogue" drug companies were buying up rights to generic formulas "in capricious ways," squeezing out their competitors and driving up prices, Harrison said, it became the responsibility of the hospital systems to take them on.

"This is our weapon to combat that activity," he said, adding that the locally led initiative will result in lower costs and more predictable supplies of necessary drugs used in hospitals every day.

"They should make things better for people and that's really why Intermountain exists," Harrison said.

At least four major health systems — Ascension, SSM Health, Trinity Health and the U.S. Department of Veterans Affairs' Veterans Health Administration, including its Salt Lake VA Hospital — have joined Intermountain in the announcement of this business endeavor. They're open to even more partners, hoping to entice them all, said Intermountain Vice President Dan Liljenquist, who came up with the idea.

He said the solution stems from his time spent as a senator in the Utah Legislature and facing continual challenges to cover Medicaid costs as a state.

"It's always been hovering around in my mind: 'How do we fix this,'" Liljenquist said. Some of the drugs falling into shortages, he said, have been around for decades and are necessary for daily hospital care. Surgeries are being delayed, and while it hasn't happened at Intermountain hospitals, Liljenquist said patients across the country are sometimes required to wait for needed treatment.

"With a lot of these drugs, either you have them or you die," he said. "We should not be in this situation." 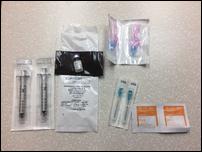 Intermountain Healthcare and University of Utah Health Care have dropped the EpiPen for a far cheaper alternative.

He said "a handful of bad actors" in pharmaceutical manufacturing businesses "are really hurting our patients."

"We see these issues every day in our hospitals as we chase down a drug so we can provide a cancer treatment to a patient who is dying and it affects us," Liljenquist said. "We just thought if we got together collectively as systems, we could do this."

And, he said, the more, the merrier, as "the more we can pull together, the more successful we will be."

The idea is that participating hospitals will contract to purchase a minimum amount of the various drugs made available — about 20 to start with, though they're not disclosed to keep a competitive edge — to ensure the success of the not-for-profit generic drug company Harrison said will be based in Salt Lake City.

There will be no shareholders and no dividends in the action, the first of its kind in the industry, and the initial startup costs will be donated by the participating partners, who expect to recoup their costs. The new company intends to operate as an FDA-approved manufacturer, not asking for special privileges and following existing regulations for drug production and distribution.

It will focus only on generic medications, for which patents have already expired.

Counting Intermountain facilities in Utah and Idaho, the already committed systems represent more than 450 hospitals throughout the country. Harrison said that following Thursday's announcement, calls from interested parties were pouring in.

"We hope it sends a signal," Liljenquist said, "enough for some to say they're being unreasonable."

Once they enter the market, he said, they intend to stay.

Project Rx, he said, welcomes any "thoughtful, excellent, for-profit system," including children's hospitals and the like, as well as impact-minded philanthropists to help accomplish the dream.

"It's really about their willingness to commit to be part of the team," he said.

An advisory committee for the venture is made up of industry experts, including Utah-native and Harvard business school professor and Intermountain board member Clayton Christensen, as well as other well-known, retired drug company officials and former government advisers on health care. It will guide the development and execution of a business plan for the collaborative that will likely begin in early 2019.

"We are truly trying to create a societally owned company with a mission to make sure these drugs are available and affordable," Liljenquist said. "We think that just maybe this could be something that could benefit society for a very long time, and we certainly intend to do our best to make that so."