The Utah Republican and Sen. Edward Markley, D-Mass., sent a letter to Homeland Security Secretary Kirstjen Nielson on Thursday saying Congress has never authorized biometric exit scanning for American citizens. They urged the agency to delay rolling out the facial scans until it addresses privacy and legal questions.

"American citizens should not have to choose between traveling internationally and ensuring the security of their personal data," the senators wrote.

Homeland Security requires passengers departing on international flights at nine U.S. airports to submit to a face scan so their faces can be compared to the department's biometric database to verify their identity. The department intends to expand the program to all the country's international airports in 2018.

The Center on Privacy and Technology at Georgetown University Law Center concluded in a report released Thursday that Homeland Security improperly gathers data on Americans leaving on foreign flights.

The department should stop scanning Americans as they leave the country and should prove that face scans are capable of identifying impostors without inconveniencing everyone else, the report said. The system erroneously flags as many as one in 25 passengers for further scrutiny.

That means thousands of travelers could be wrongfully denied boarding each day, Lee and Markley say. 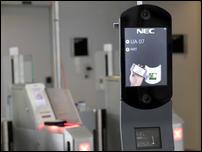 If the Trump administration gets its way, U.S. citizens boarding international flights will have to submit to a face scan, a plan privacy advocates call a step toward a surveillance state.

Neither Congress nor Homeland Security has justified the need for the billion-dollar program, which, according to the report, is on "shaky" legal ground.

"The privacy concerns implicated by biometric exit are at least as troubling as the system's legal and technical problems," the report says.

Lee and Markley want Homeland Security to answer questions about accuracy and potential flaws in the technology, how the program will not unduly burden travelers, including certain races or gender, and how it is improving visa overstay travel fraud.