Trump, Hatch gush over each other in tax bill celebration

In turn, Hatch, R-Utah, said, "We’re going to keep fighting to make this the greatest presidency we’ve seen not only in generations but maybe ever."

Exultant House and Senate Republican leaders gathered with Trump on the White House South Lawn to hail the newly passed tax overhaul and slap each other on the back, with no one heaping higher praise on the president than Hatch.

"Mr. President, I have to say you're living up to everything I thought you would," the seven-term senator said. "You're one heck of a leader."

Trump introduced Hatch, saying the senator was "someone who spoke very well of me when it wasn’t the easiest thing to do." He commended Hatch, the Senate Finance Committee chairman, for his work on the bill.

Hatch said Congress couldn't have passed the legislation without Trump. The president, he said, is getting things done with "sheer will" in many ways.

"All I can say is we're making headway. This is just the beginning," he said. "I just hope we all get behind him every way we can and we get this country turned around in ways that will benefit the whole world."

Hatch said he hopes people will come to realize how great America really is and how the rest of the world depends on it. He said he came from humble roots and it was one of the great privileges of his life to stand with the president, "who I love and appreciate so much."

"All I can say is God loves this country. We all know it. We wouldn't be where we are without him," Hatch said.

The 83-year-old senator has said he intends to run for an eighth term but won't announce a final decision until after the first of the year. During his visit to Salt Lake City earlier this year, Trump acknowledged he is pressing Hatch to run. 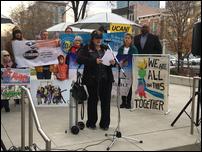 Hatch played a key role in passing the tax reform bill and getting Trump his first significant victory, calling it a "historic" night.

"The Democrats have said that the American people will remember this night. I hope they do because we passed one of the most important tax breaks in this country's history," Hatch said after midnight Tuesday.

Sen. Mike Lee, R-Utah, said in a statement Wednesday that there is still a lot of work to be done.

"First and foremost we need to work with Democrats to make these middle-class tax cuts permanent. Second, we can do even more for lower-income working families by making the expanded child tax credit in this bill fully refundable up to payroll tax liability," he said.

The bill permanently cuts the corporate tax rate from 35 percent to 21 percent. But the tax cuts for families and individuals expire in 2026.