10PM: Trump: 'Public lands will once again be for public use'
Ashley Kewish, KSL TV

6PM: Trump: 'Public lands will once again be for public use'
Ladd Egan, KSL TV

5PM: Trump: 'Public lands will once again be for public use'
Ladd Egan, KSL TV

"You know the best how to take care of your land," Trump said, telling the crowd of state and local officials and other invited guests that past administrations had "severely abused" the 1906 Antiquities Act in designating the monuments.

The lawsuit is focused on the Grand Staircase-Escalante and contends the president lacks the authority under the Antiquities Act to downsize national monuments. A lawsuit over Bears Ears is also expected soon.

“The gloves are off and we’re taking the fight to the president in Washington, D.C.,” said SUWA attorney Steve Bloch. “We’re outraged by what the president’s trying to do.”

Trump said at the Capitol that the monuments have led to "harmful and unnecessary restrictions" as a result of federal overreach on hunting, ranching and what he termed responsible economic development.

Trump said his actions mean "public lands will once again be for public use."

He called modifying the monuments set aside by former Presidents Bill Clinton and Barack Obama a "very historic action to reverse federal overreach and restore the rights of this land to your citizens," that should be seen as sensible rather than controversial.

Joining Trump onstage were Utah's congressional delegation, including Sens. Orrin Hatch and Mike Lee, who traveled with him from Washington, D.C, aboard Air Force One, Gov. Gary Herbert, and other state and Native American leaders.

"Four more years," someone shouted from the audience as the president signed a pair of proclamations. He did not announce details but did sign a cowboy hat for San Juan County Commissioner Bruce Adams before leaving the stage.

Grand Staircase-Escalante will be cut back from nearly 1.9 million acres to three units — the 211,983-acre Grand Staircase, the 551,117-acre Kaiparowits and the 243,241-acre Escalante Canyons.

The numbers are similar to those that surfaced in reports last week based on leaked documents.

The president's proclamations also protect grazing and opens roads to motorized vehicle use, according to the information provided, while allowing for eventual tribal co-management of Shash Jaa.

"We don't want it fenced up," she said. "We just want people to leave it alone."

Lyman, who spent 10 days in jail and was ordered to pay $96,000 in restitution after leading an ATV ride protesting motorized vehicle restrictions in Recapture Canyon, said the president's actions "restore the county's voice."

He said those who "love the concept of a national monument" need to think about the people who live in the region.

"They need to take a minute to kind of step into our shoes and recognize there are people down there who view this as much more than a recreation area," Lyman said. "It's the place where we make our livings, it's the place our history is connected to." 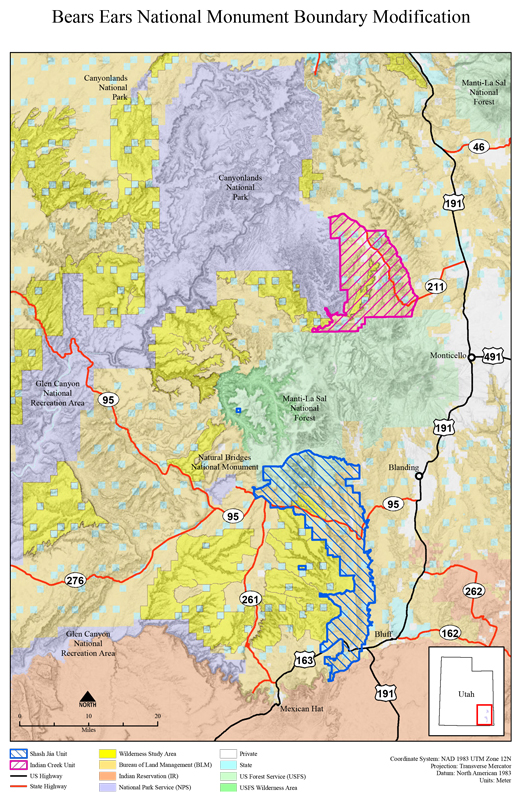 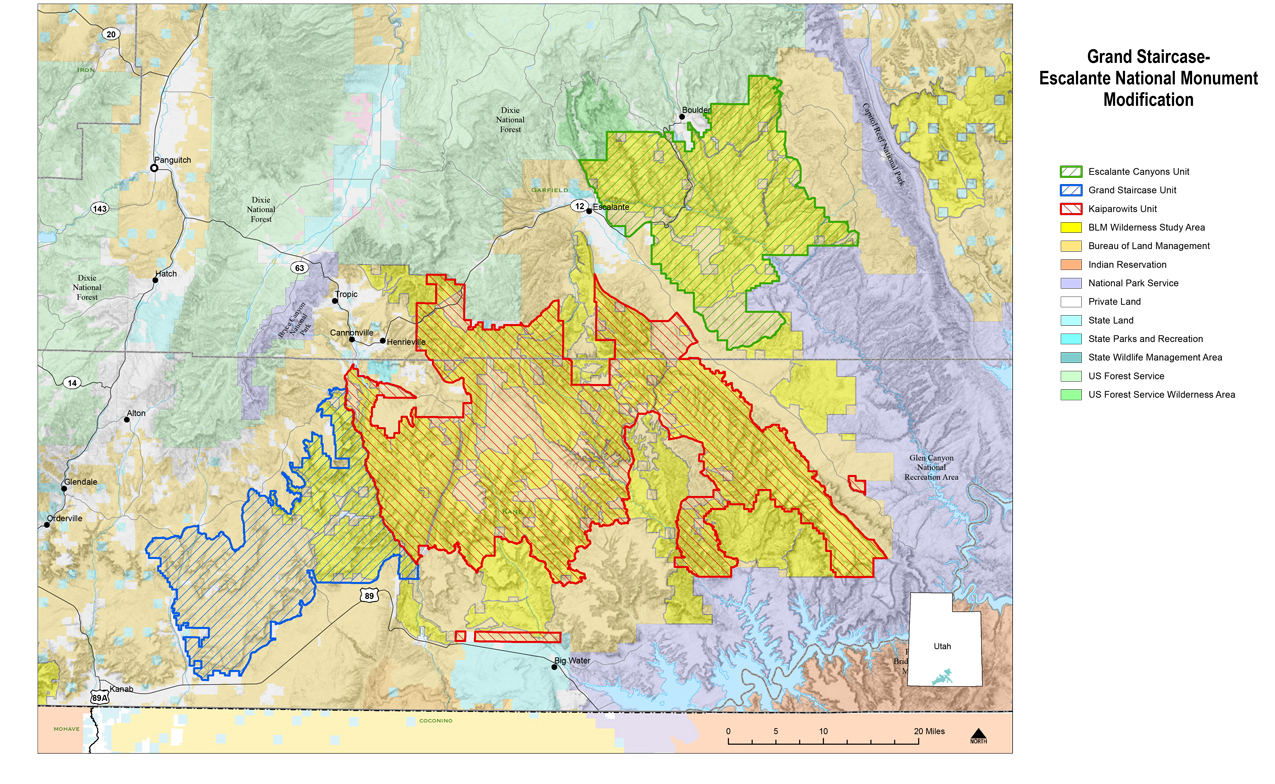 Hundreds of protesters gathered outside the Capitol and some waved signs and yelled at the president along the motorcade route. Later, there was a confrontation on State Street near 100 South between some protesters and police in riot gear.

Trump left Utah shortly after 1 p.m. Before heading to the Capitol, Trump toured the LDS Church’s Welfare Square and sat down with top church leaders in a meeting arranged by Hatch.

They talked about religious liberty, the church’s welfare program and church doctrine, and Trump praised the church’s efforts to help needy people around the world.

“The job you've done is beyond anything you could think of — 180 countries, taking care of people the way you take of people, and the respect that you have all over the world,” the president said.

While waiting for the president to arrive at the Capitol, Interior Secretary Ryan Zinke and Herbert met privately at the Capitol with members of Utah's congressional delegation as well as state and local officials.

House Speaker Greg Hughes, R-Draper, kicked off the program from a podium at the base of the stairs to the Utah House decorated with American flags, telling the crowd that "the little guy's voice was heard" by the White House.

Zinke praised the monument reductions, based on recommendations he made following a tour of the remote areas earlier this year after Trump ordered a review of monuments designated over the past 21 years.

Earlier Monday, Zinke told reporters on Air Force One, "When a monument is used to prevent rather than protect, the president is right to take action." He said he reviewed 150 monuments, including 27 in detail.

Only a "handful" of changes were recommended, with the biggest being Grand Staircase-Escalate, named by Clinton in 1996, and Bears Ears, by Obama in the final days of his presidency.

Zinke said his report will be released Tuesday.

Trump told reporters before leaving the White House early Monday that he was headed to Utah for a great event that is "so important for states' rights and so important for the people of Utah."

Trump was met by cheers of support as he touched down Monday morning in Salt Lake City.

Supporters gathered at Roland R. Wright Air National Guard Base raised shouts and applause the moment they glimpsed Trump's bright red tie through the door of the plane.

Trump waved to the group and clapped as he disembarked, flanked by Hatch and Lee and followed by Zinke in a black cowboy hat. They were greeted on the ground by the governor and his wife, Jeanette.

The president and the Utah senators paused to shake hands and visit with the crowd, including twin brothers Trevor and Tristen Tharp, 16, who came dressed in suits and wigs to resemble Trump and Vice President Mike Pence.

The brothers said Trump chatted briefly with them as they asked him to sign the bill of their red "Make America Great Again" hat and praised him as "a very good-looking man."

"I get that all the time," was the president's response, according to the boys.

"We're very excited to see the president taking this big step," Lee said, calling the monuments "a great example of how the federal government sometimes oversteps its bounds."

Rep. Rob Bishop, R-Utah, said he believes federal legislation is needed to protect the reduction from being reversed by a later president — and make it less susceptible to action in the courts.

"It is true everyone now is threatening to sue, and one judge making a silly decision could unravel almost everything one way or the other," he said.

Bishop, along with fellow Utah GOP Reps. Chris Stewart and John Curtis, have scheduled a news conference in Washington, D.C., on Tuesday to lay out legislation to give congressional approval to the new boundaries and detail land uses.

Doing that through legislation will give "some finality and some certainty to it, and the entire delegation's going to be working on that. That's the tough part. So this is the easy part today. Tomorrow starts the hard job," Bishop said.

Utahns are split over what should happen to the national monuments, with thousands of people turning out to protest the president's actions Saturday at the Capitol, while others rallied in San Juan County in support of the reductions.

Those who want to leave the monuments as they are say they must be protected to preserve tribal artifacts and pristine natural landscapes, while those who say they're too big don't want to limit mining and other potentially profitable activities.

More lawsuits are anticipated. Environmental and Native American groups have pledged to challenge the new boundaries, seen as the largest-ever rollback to previous presidential designations under the Antiquities Act.

Trump's announcement is a long time in the making. At the beginning of the year, state lawmakers, along with members of Utah's congressional delegation, pushed the newly elected president to roll back the monument designations.

Former Gov. Mike Leavitt — who said he was told again and again that nothing was happening in the days before Clinton went to the Grand Canyon to announce Grand Staircase-Escalante — called Trump's actions an important statement about the Antiquities Act.

"I hope it’s a big red stop sign that says to future administrations, we need to use this law the way it was intended, not as a way of being able to set aside massive areas of land far beyond what is required," Leavitt said.

In Washington, Hatch in particular used his influence with the president to get the issue on the administration's agenda. In April, Trump ordered a review of national monuments that included both Bears Ears and Grand Staircase-Escalante.

According to Hatch's office, the president even said, “I’m approving the Bears Ears recommendation for you, Orrin," when he told the senator in October he'd follow Zinke's recommendation to resize the monuments.

Lots of signs and posters at the @realDonaldTrump protest outside the Capitol #TrumpUtahpic.twitter.com/eZxxtP6KIN

The White House said then that Trump was heading to Utah to make his decision public, but it was Hatch who confirmed when the president was coming and invited him to meet with leaders of the LDS Church.

Some were already calling the president's visit a "soft launch" for a Hatch re-election campaign.

Politico reported Trump is pushing Hatch to run again to block Mitt Romney, one of his harshest critics during last year's presidential race, from seeking his seat in the Senate.

Trump called the senator, who was first elected in 1976, "a true fighter" in his speech at the Capitol "We hope you will continue to serve your state and your country in the Senate for a very long time to come," the president said to applause.

Hatch has yet to say whether he will seek an eighth term in 2018. He has been seen as one of Trump's most loyal allies in Congress, even though the president is not all that popular among Utahns.

A recent UtahPolicy.com poll found that only 45 percent of Utahns approve of the president's job performance, the same margin Trump won the reliably Republican state in the 2016 presidential race.

Romney, the GOP's 2012 presidential nominee was out of town on business Monday but said it was "welcome news that President Trump and Sen. Hatch are coming to Utah to reverse much of President Obama’s federal land grab of Bears Ears."