Search continues for 'persons of interest' in West Jordan killing

WEST JORDAN — Two people considered "persons of interest" in the killing of a West Jordan man likely have fled the state, police said.

According to five search warrants unsealed Tuesday in 3rd District Court, residents in that area were getting ready for bed when they heard noises.

One resident told police he "heard two loud thumps. (He) looked over his fence and saw a man on the ground next to what he thought was a white, early '90s Buick," according to the warrants.

The neighbor initially thought it was an auto-pedestrian crash. A vehicle that he believed was occupied by three people then drove away, the warrant states.

As emergency crews were attending to Zuniga-Guzman, they discovered what appeared to be a bullet hole in his chest, according to the warrants.

In retracing the man's steps, detectives learned that Zuniga-Guzman went out on Oct. 31 with some of his co-workers, one of the warrants states. His mother last saw him alive at 8:30 p.m., according to the warrant.

Investigators also learned that Zuniga-Guzman hangs out regularly with Molina's brother, who lived in the same area, according to a warrant. Police went to the residence, and officers "observed an older white passenger vehicle parked at (the) residence that matched the description of the vehicle that witnesses observed fleeing the scene where (Zuniga-Guzman) was found deceased," the warrant states. 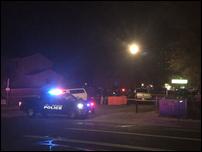 Police were investigating a suspected homicide early Wednesday in West Jordan where a man's body was found in the street.

A beer can inside the vehicle matched another found at the crime scene, police said, and there was also, "in plain view, a small-caliber bullet lying on the front passenger seat," according to the warrant.

After obtaining a search warrant for the vehicle, among the items found by detectives in the car was a "red substance on front passenger seat," .22-caliber bullets on the "front passenger floor board," and documents identifying Huff, according to a return for the warrant.

A silver midsize pickup truck matching the description of the vehicle Zuniga-Guzman's mother saw her son get into was parked in the driveway, the warrants state.

Police previously stated they believed Zuniga-Guzman was shot at a different location and his body dumped in the street.

Molina is described as 5 feet 6 inches tall, weighing 195 pounds, and may be driving a maroon 2005 Nissan Altima.