COALVILLE — Summit County officials are working toward an ambitious energy plan — one that would see the entire county running on 100 percent renewable electric energy by 2032.

It would also mean Summit County would be one of the first counties in the entire country to be completely fueled by renewable energy sources.

“Summit County is deeply committed to environmental stewardship and climate action,” Yoder said. “It’s just a win all the way around if we invest in and protect the environment and the resources that we all need to live by and survive with.”

Summit County Council members will vote on whether to approve the plan next month, Yoder said.

In a council meeting on Aug. 23, council member Glenn Wright said the county wants to go above and beyond in efforts to reduce emissions. Most climate scientists say that 80 percent of the world’s carbon emissions should be reduced by 2050, Wright said, but he wants to get ahead of that.

“To be a little more aggressive, I think we should do it a few years earlier,” Wright said during the meeting.

Electric energy would come from a combination of sources, possibly including solar, wind and hydroelectric power, Yoder said.

The power would come from infrastructure that already exists, and some new infrastructure yet to be built, she said. Another possibility would be a power-purchase agreement with an electric utility, Yoder added.

“They want to have an informed goal that’s reasonable, attainable and yet aggressive,” she said of the county council. “We don’t want to put a goal out there that’s pie in the sky and would cost way too much money to accomplish and therefore is a waste of time and energy, so they want it to be realistic.”

Summit County has about 39,000 residents. Between commercial and residential properties, about 2 megawatts of energy the county uses already comes from solar sources, according to Yoder. 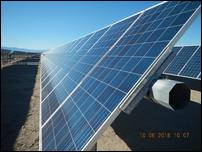 Nearly 20 megawatts of solar energy due to come online in Utah in early 2017 has been sold to residential and business consumers who want to cut their monthly utility bills or become more reliant on clean energy.

Committing to the energy plan likely would require an initial, more expensive investment for high-efficiency buildings and vehicles, Yoder said. That investment would pay off in the long run for residents in the form of fuel cost savings, she said.

Many county residents have called for a more aggressive emissions-reduction plan in addition to the renewable energy commitment, Yoder said.

Currently, the county is committed to reducing emissions by about 1 percent each year, but officials may discuss lowering them even further, she said.

“We’re doing a lot in the county, and all of these things reduce emissions,” Yoder said.

Officials have tried to make Summit County attractive for people who want to install their own solar energy systems for their homes, Yoder said. The county has waived building fees for solar systems and expedites the permitting process for them, she said.

The county also owns several electric vehicles as part of its fleet. Officials have worked to replace antiquated light fixtures with energy-efficient LED bulbs, and some older county buildings have been recommissioned to become more efficient, Yoder said.

The county also entered a Georgetown University sustainability contest for which the grand prize is $5 million, Yoder said. The winner, who will be awarded the funds in order to continue energy-efficiency practices, will be announced soon, and Yoder said she’s confident that Summit County is near the top of the contenders.

Renewable energy technology is changing rapidly, so planning for the long-term is tough, Yoder said. That won’t stop Summit County from setting ambitious goals, though.

“These things are changing year to year, and to project out five, ten or 20 years what 100 percent renewable energy will cost — or even what things will cost in five years — is extremely difficult. … We have done a great deal to reduce emissions each year since i’ve been on board,” she said.