BOISE, Idaho — Idaho wildfires have burned more than 256,000 acres this season — and is still facing another five or six weeks of higher than normal fire potential, according to the Boise-based National Interagency Fire Center.

Wildfire activity in the West has escalated in recent days because of thunderstorms that have sparked hundreds of new fires, according to NIFC. State and federal fire managers have raised national preparedness to its top level — level five — for only the fifth time since 2007. That means they can call in additional assistance from the military and international sources.

Grasses and brush that greened up after an unusually snowy winter and mild spring are fully dried out following near-record July heat, creating abundant fuel for wildfires.

Those conditions, coupled with the anticipated influx of tens of thousands of out-of-state visitors to recreational areas for the Aug. 21 eclipse, have fire officials concerned.

“It’s the hottest, driest conditions of the year,” said Ed Delgado, predictive services manager at the National Interagency Fire Center. “If by chance we get a good rain-producing system in the next two weeks, before the eclipse, that could mitigate fire conditions.”

Fires could affect viewing of the eclipse, and that’s already a fear because of the smoke from blazes around the Northwest. 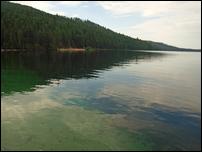 Looking for more news about the Gem State? Visit our <a href="https://www.ksl.com/?nid=1418" target="_blank">Idaho news section</a> for more stories about Idaho politics, events, and features.
×