"(Ott's siblings) have felt it to be in their brother's best interest that Mr. Ott resign his position with Salt Lake County as soon as possible," said the family's attorney, Mary Corporon.

In a court filing Thursday, obtained from the Salt Lake County District Attorney's Office, attorneys for Ott, his family and the county are asking 3rd District Judge Bruce Lubeck to sign off on the separation agreement.

The agreement would provide a severance pay lump sum of $35,000 — 12 weeks of Ott's salary — to be placed into an account dedicated to Ott's care. He would also stay on the county's health care through Aug. 15, the filing states.

"By reason of mental incapacity that is not temporary in nature, (Ott) is unable to fulfill the duties of his office and thus is unable to continue to serve as the elected Salt Lake County recorder," the letter states.

"Mr. Ott is a good human being and was at one time a very good Salt Lake County recorder," Corporon said. "He was a very intelligent and competent human being and served this county well, and it is unfortunate, I suppose, that all of us will get to a point in our lives where we can no longer do what we've done before. That problem is now resolved for him to some extent, and we hope his family can have peace from that and that the county can move on from this issue."

While Corporon, who is Ott's ex-wife, said she and Ott's family are treating the resignation agreement as a "done deal," the agreement won't be ratified unless the judge signs it.

Karmen Sanone, Ott's office aide and self-described "longtime friend," is embroiled in a legal fight with Ott's family, contesting their guardianship over the county recorder.

Lubeck last week ruled to maintain Ott's family's temporary legal guardianship status, though the matter of a permanent guardian won't be sorted out until after a Sept. 6 court hearing.

Sanone said she is "totally shocked" by the separation agreement and "concerned" about the filing, calling the action "premature" because permanent guardianship hasn't yet been determined.

"Ultimately I want the very best for Gary," she said. "I'm not sure why they felt the need to rush forward with this and why other interested parties were left out of the loop. ... I find that troublesome."

Sanone — who said she tried to initiate Ott's resignation negotiations with county officials last month — said she hadn't yet had an opportunity to review the agreement and she had "concerns that the settlement may not have been in his best interests."

Sanone claimed in a court hearing last week that she had an advance health care document signed by Ott in 2015 nominating her as a guardian, but the judge ruled in favor of the family's request to maintain at least temporary guardianship.

Corporon said the agreement is a "fairly standard" severance package for employees of Salt Lake County.

"Mr. Ott's family has asked me to thank the county for working with us quickly and efficiently," Corporon said.

Included in the filing is a letter from Ott's siblings to County Council Chairman Steve Debry informing him of Ott's resignation.

"Please know that Gary's years of service to the county and its residents included many of the proudest and most treasured moments of his life," Ott's siblings wrote. "He is and was profoundly grateful for the opportunity to serve the public good."

The court filing is a significant development in the ongoing story about Ott's public health concerns — a story the Deseret News has pursued since it published its first investigative report in February 2016 when Grantsville police found Ott wandering in freezing temperatures in rural Tooele County.

The report, combined with a County Council meeting in October when Ott struggeled to answer simple questions, raised mounting concerns about Ott's condition and whether he's able to continue serving in his $190,000 taxpayer-paid elected position.

Also last fall, a county audit found Ott had little involvement in his own office and his duties have been mostly delegated to his chief deputy, Julie Dole. Emails released this week showed Sanone had, on at least one instance, pondered how to make an email "look as if" it had come from Ott's computer.

Dole and Sanone have been accused by county officials, employees and others of covering up Ott's condition so they can keep their jobs in the recorders' office. Both women have denied those allegations.

Dole earns about $190,000 in salary and benefits and Sanone receives about $70,000, according to the state's transparency website.

In the meantime, county officials have grappled with the situation, having no legal means to remove Ott from office — that is, until Thursday, pending a judge signature.

"I hope this is bringing to close a difficult chapter for people who care about Gary Ott — and that this is really the resolution that we've hoped for, a good one for Gary Ott, and good for the taxpayer," Salt Lake County Mayor McAdams said. "It's important we have someone in the position of recorder who is answerable to the public and can make the decisions of that office."

McAdams said he hopes the judge "recognizes this is in the best interest" of Ott, but if he doesn't sign the agreement "I guess we'd be back to square one."

Corporon declined to discuss Ott's personal circumstances or medical condition, but according to the court filing, Ott has a "mental incapacity that is not temporary in nature."

When asked if Ott is aware of the separation agreement during a news conference, Corporon replied: "I don't know how to answer that question. I couldn't tell you what Mr. Ott is or is not aware of at this point." 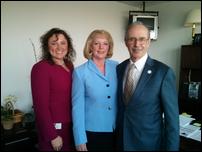 Records: Ott's staff fielding his emails; aide sought to make email 'look as if' it came from him

Salt Lake County Recorder Gary Ott’s staff has been fielding his emails for years, according to emails obtained by the Deseret News through a public records request.

"I don't want to characterize the last 12 months of inquiries about Mr. Ott's circumstances, but anybody that has read (The Deseret News) articles or the articles of other people in this room, would be well aware of why the family felt some action needed to be taken."

Corporon also said the question of whether Ott has been a victim in any way is now "a subject of potential litigation," she said, declining to comment further.

Recently, Ott's Salt Lake City house fell into default because of a failure to make payments on a home equity loan. When asked about how his salary has been spent, Corporon said: "We're still investigating that issue."

Salt Lake County District Attorney Sim Gill — whose office has also been investigating Ott's well-being — said if Ott's Aug. 1 resignation agreement is approved by the judge, the Salt Lake County Republican Party will have 30 days to nominate someone for the vacancy until a special election in 2018.

Then whoever wins that election will have the opportunity to run again for the position in 2020, when Ott's term ends.

Ott has been Salt Lake County Recorder since 2001.

Salt Lake County GOP Chairman Jake Parkinson said at least three people have stepped forward expressing interest in the position, but he declined to name them, wanting to allow them to announce their own candidacy.

Ott's deputy, Dole, has told the Deseret News and KSL she would be interested in being the next county recorder because she knows how to run the office.

When asked about Dole, Parkinson said it would be up to the party's precinct chairs to make their nomination, not him, so he won't support any specific candidate.

Councilwoman Aimee Winder Newton, however, said Thursday she would not support Dole.

"I have serious reservations about Julie Dole continuing in that office," Winder said. "I hope our Republican delegates can do their homework and see what has been happening over the last year and a half so they can make a wise decision."

Newton said she worries county officials haven't had "complete transparency" from Dole regarding Ott's situation, recalling a time when Dole had posted a picture on social media amid questions of his competency, stating "another day in the office."

"For someone to keep up a ruse like this is, to me, repulsive," Winder said. "Because she's made a conscious decision to deceive the public and county officials, it makes me feel like she would not be the best person to run the office. We need somebody new."

Dole has maintained she hasn't tried to hide Ott's condition. She has said she's not been in a position to comment on her boss's health or demand that he resign.

Dole said throughout the time she's worked in the recorder's office, "everything work related has always been transparent."

"I, just like everybody else, want what's best for Gary, I've just not been in the position to make that determination or to do anything about that," Dole said. "The only authority I've had is over the office — to keep it running well."

As for the family's court filing, Dole said the separation agreement is "probably the best" for Ott.

"Everybody can see he's withdrawn from the office from the last several months, so it does seem like it's a good decision to me," she said.